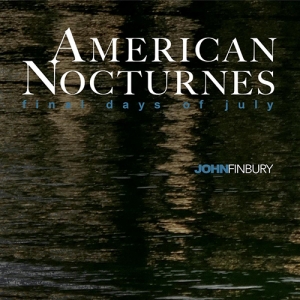 A new album of original compositions by Grammy and Latin Grammy nominated composer John Finbury, was released through Green Flash Music on May 1, 2020. Produced and arranged by Finbury, Bob Patton, and co-produced by Emilio D. Miler, American Nocturnes – Final Days of July is a collection of ten evocative pieces that spotlights the composer's mastery in an intimate small ensemble setting.

It may come as something of a surprise to those familiar with Finbury's previous releases in the Jazz idiom (including the 2020 Grammy Nominated "Sorte!), that American Nocturnes is far removed from the Latin themes that typify John's recent albums. The absence of percussion instruments gives these performances a more elastic sense of time, while the lyrical qualities of the melodies makes the composer's reference to them as ‘songs' most suitable.
This is music that crosses genres and defies stylistic boundaries. It is classical and through-composed yet often leaves space and improvisational opportunity for the musicians, often disguised as developments and ornamentations of the melodies. It is music that is bound to fascinate listeners through a deeply emotional, delightful sway between jazz and chamber music. The instrumentation in this record is also unique, with the core duo of piano and cello joined by guitar, harmonica and accordion.
www.greenflashmusic.com