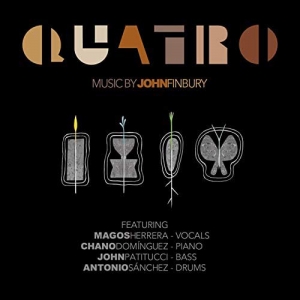 John Finbury's new album "QUATRO" premieres new music with broad Latin American and Spanish influences, mixed and matched in an unorthodox fashion.Alternating vocal and instrumental tracks, the album was produced by Latin Grammy winner Emilio D. Miler, and features Magos Herrera on vocals, Chano Domínguez on piano, John Patitucci on bass, and Antonio Sánchez on drums. Recorded over two sessions in New York in 2019, "Quatro" is both a celebration of cultural diversity and immigration, and a condemnation of those who seek restriction based upon prejudice. The album opener, "Llegará El Día" ("The Day Will Come"), is a "Freedom Song" and a fierce assertion of the album's concept, with influences of Peruvian Festejo and Mexican Huapango. The lyrics, penned by producer D. Miler, knit a poetic landscape with references to Mexican iconography and to someone, unnamed, who will soon disappear.