“Why was Pops’ performance in Dave and Iola Brubeck’s The Real Ambassadors such a moving and meaningful experience for him? Does this project have a special significance in Pops’ life beyond the music itself?” [...]

“You dabble in songwriting,” my friend said. “What do you think of the Led Zeppelin case? What does it mean?” The questions were simply asked and no doubt simple answers were expected. Yes, on [...]

"To some, he is cocky, sometimes overbearing, at times unnecessarily arrogant. They only have the outward, extroverted exuberance to go by. Calm Buddy down, show him that he doesn't have to spark every gathering [...] 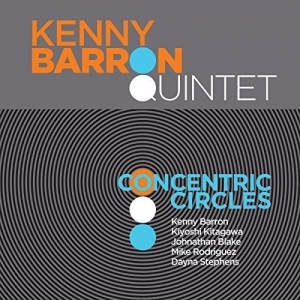 One of the great veterans of jazz, pianist Kenny Barron, who recently turned 75, has been an important part of the jazz scene since the early 1960s. Born and raised in Philadelphia, Barron was a pro as a teenager. His older brother was the adventurous tenor-saxophonist Bill Barron. After performing regularly with Philly Joe Jones while in high school, the pianist moved to New York City where he worked with such notables as Roy Haynes, Lee Morgan and James Moody. He became well known in the jazz world due to his long period as a member of the Dizzy Gillespie Quintet (1962-67). After leaving Gillespie, Barron worked with Freddie Hubbard, Stanley Turrentine, Milt Jackson, Buddy Rich, Yusef Lateef, Ron Carter, Stan Getz, the group Sphere, and most often with his own trios. He has led over 40 albums thus far and is today considered one of the giants of modern mainstream jazz.

For his recent Blue Note album Concentric Circles, Barron heads a quintet that features trumpeter Mike Rodriguez, tenor-saxophonist Dayna Stephens, bassist Kiyoshi Kitagawa and drummer Johnathan Blake. The group (which is really his regular trio with two added horns) performs eight of the pianist's originals plus a song apiece by Caetano Veloso, Lenny White and Thelonious Monk. The songs feature stimulating chord changes, concise solos, and an attractive group sound that looks back towards the mid-1960s although with modern harmonies.

The opener, "DFW," is a medium-tempo piece that serves as a fine introduction to Barron's quintet. Everyone solos except bassist Kitagawa, who gets a fine spot in the second number, the moody jazz waltz 'Concentric Circles." The soulful and catchy "Blue Waters" features a hot and lively trumpet solo from Rodriguez that contrasts with the introspective and melancholy "A Short Journey" which one could imagine the mid-1960s Miles Davis Quintet with Wayne Shorter playing. Veloso's "Aquele Frevo Axe" is an infectious piece with a bossa nova feel that begins and ends with Barron at the head of his trio. "Von Hangman" is a driving uptempo piece with chord changes reminiscent of Thelonious Monk and outstanding solos by Stephens, Rodriguez and Barron.

The laidback "In The Dark" sets a mysterious and bleak mood. "Baile," one of Barron's better songs, is a post bop exploration with Latin rhythms. Lenny White's "L's Bop" is a harmonically complex but hard-swinging romp. After the rhythmically tricky "I'm Just Savin,'" the program concludes with Barron alone at the piano creating a charming and lightly striding version of Monk's "Reflections."

Many moods are explored during this enjoyable set, and Kenny Barron shows that he remains very much in his creative prime.