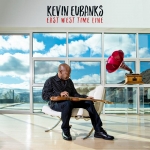 Since his 18-year tenure as guitarist and music director of TV's The Tonight Show Band ended in 2010, Philadelphia-born guitarist, composer Kevin Eubanks has been on a creative roll. On East West Time Line, Eubanks explores the chemistry he maintains with musicians on both coasts. And once again, his distinctive fingerstyle approach to the instrument is in the service of tunes that run the stylist gamut from urgent swingers to introspective ballads to Latin-tinged numbers and some get-down Philly funk.

Joining Eubanks on this stellar outing are longtime collaborator and former Berklee College of Music schoolmate, drummer Marvin "Smitty" Smith, who fuels the West Coast outfit alongside seasoned session bassist Rene Camacho, percussionist Mino Cinelu and saxophonist Bill Pierce. Smith's East Coast counterpart on this bi-coastal session is the irrepressibly swinging Jeff "Tain" Watts, a force of nature on the kit who combines with bassist Dave Holland, Philadelphia-based pianist Orrin Evans and New York trumpeter Nicholas Payton for a potent lineup. Together these great musicians bring out the best in Eubanks' six-string prowess and ignite his searching instincts throughout the sessions in Los Angeles and New York.

Overall, Eubanks seems exceedingly pleased with the copacetic nature of his first bi-coastal recording. "I think because I'm so familiar with all the musicians and we played together over the years in different settings, on different tours, that it helped the music quite a bit. There's something that goes with friendship, knowing everybody's journey to a large extent, that really enhances the communication between the players on a session. It's that thing where everybody's pulling for each other to do well and trying to make each other sound better, and you keep your sorry-ass ego out of it. We all have egos, we're human beings and everything, but through the love of the music and wanting the best, good things happen. It's really such a wonderful kind of democracy that you don't see in other things. I think jazz music is the most perfect example of democracy in action."