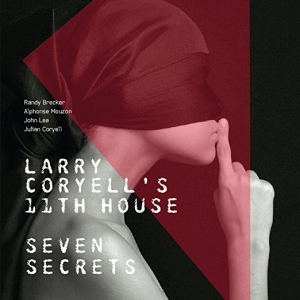 Larry Coryell was the first fusion guitarist. He brought the sound of electric blues and rock into jazz during 1966-67 on his recordings with Chico Hamilton, Free Spirits, and the Gary Burton Quartet. While later overshadowed by John McLaughlin and Al DiMeola, Coryell organized and led The Eleventh House, one of the major fusion bands during 1973-76. He had a wide-ranging career for decades that included straight ahead jazz dates, acoustic projects, and virtuoso guitar encounters with McLaughlin and DiMeola along with his own original music.

The Eleventh House had a reunion during 1998-99 that included extensive touring. In July 2015, Coryell brought back The Eleventh House again. This last version included two other original members (drummer Alphonse Mouzon and trumpeter Randy Brecker) and John Lee who was the second bassist in the band of the 1970s. Because keyboardist Mike Mandel was ailing, Larry’s son Julian Coryell took his place on guitar.

Seven Secrets can be thought of as a last hurrah for Mouzon, who passed away on Dec. 25,, 2016, and is certainly one of Larry Coryell’s final recordings since he also passed on Feb. 19, 2017. However everyone sounds quite healthy and energetic on this CD. The veterans had not mellowed with age and there is plenty of exciting guitar by both of the Coryells, passionate Brecker trumpet solos, and assertive playing by Mouzon (who also doubles on keyboards on four songs) and Lee. There is more mood and style variation than one might expect, ranging from explosive fusion and electric blues (“Mudhen Blues”) to performances that are a bit more easy-listening. Larry Coryell, who takes “Molten Grace” as a feature for his acoustic guitars, and his musicians are heard throughout in prime form.

Seven Secrets is available from www.savoyjazz.com.