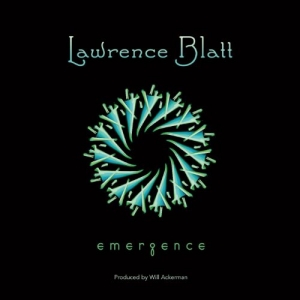 In 2007, acoustic guitarist Lawrence Blatt named one of his trademark recordings Fibonacci’s Dream, after one of the Middle Ages’ greatest mathematicians – and composed songs using Fibonacci’s “Golden Ratio” numbers to inspire the way he approached the chords, melodies and rhythms. Considering that, it’s not surprising that Blatt’s brief but crafty liner notes for his latest full length set Emergence discuss the complex patterns of the natural world and the scientific meaning of the title word. Longtime Blatt fans may dig the back story and the mention of how each composition on Emergence was tuned. But newcomers to his soulfully exquisite vibe – open-minded listeners who simply love beautifully rendered acoustic guitar based compositions (some solo, most with colorful harmonies and lush caressing instrumentation) – will find themselves engaged in his unique musical dreamscape as well.

It’s perfectly fitting that William Ackerman, Grammy winning acoustic guitarist and founder of the legendary new age label Windham Hill, produced this collection (as well as Blatt’s previous recording The Color of Sunshine). Emergence harkens back to the days when these kind of thoughtful and contemplative, gently rhythmic, exquisitely arranged albums sold in the hundreds of thousands and started a cultural movement. The brilliant violinist Charlie Bisharat, a onetime member of Windham Hill group Shadowfax, creates wistful harmonies on the title track, “The Place Where Monarchs Go” and “Green Corn” and plays 2nd violin on “Say Hello Again.” Lila Sklar’s violin is also prominently showcased throughout. Other instruments bringing texture to Blatt’s gorgeous compositions are include cello, English Horn, French Horn, baritone guitar and, on perhaps the most global-oriented of the tunes “Passing Up Bridges,” accordion, mandolin and pennywhistle.