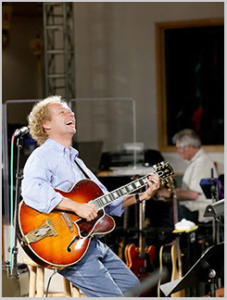 JazzMonthly:  Our next guest is one of the monster guitarists, whose music seems to always have a very cool twist and his latest project is no exception.  It’s called Smoke n’ Mirrors and that’s got to grade you real tight.  Please welcome the amazing and talented Mr. Lee Ritenour.  Lee, how are you doing?

Lee Ritenour (LR):  Just fine. Glad to be speaking with you.

JazzMonthly:   Now, this is such an international record.  I mean, you’ve got such a groove here and some wonderful players. This is 14 great tracks from start to finish. I love this record.

LR:  Thanks.  Thank you.  It was definitely a labor of love. I’ve done a lot of albums and I kinda know when I’m onto something that was inspirational for me to record and create, and this was one of those projects where I really enjoyed making the album.

LR:  Well, Smoke n’ Mirrors has very much a world music flavor and it doesn’t park itself in one country. It borrows heavily from the Brazilian angle, which is dear to my heart, and I recorded several albums with that flavor. Probably even more so than the Brazilian flavor, there’s an African, South African and West African influence and on a couple of other tracks there’s some Latin flavor and there’s some Indian tables on one track, all centered around my jazz guitar and acoustic guitars, and very much a Lee Ritenour sound.  But last year I traveled quite a bit. I guess I did around 75 shows, which is a little more than I normally do, and I traveled to some interesting places, including Johannesburg and Capetown and was in Europe for about a month, all over Western Europe, and Japan is a usual stop and The States. So I played for a lot of different kinds of fans and just these flavors that I kept hearing and being inspired by from around the world helped sort of inspire the record.

JazzMonthly:  And you could just feel that whole world flair in there.  From the beginning, with the title track, a great track, and I must say I really enjoyed Richard Bona’s bass playing in there.

LR: Oh yes. He’s just an amazing bassist and singer as well. I don’t really use him too much on the vocal aspect, although he does some vocalizing on a bass solo towards the end of the album, but he’s just this very magical bassist from Cameroon, West Africa.

JazzMonthly:  Now, talk about some of the special moments because you had to have had some special moments in all of these various countries, and just talk a little bit how the music was received.

LR:  Well, I’ve been to Europe, but I’ve been to Japan maybe 80 times. That’s a huge market for me and I have a lot of great friends from that area. But the first time, it was last year when I appeared in South Africa, and I had gotten quite a bit of fan mail saying “Why don’t you come?  Why don’t you come?”  And I had never been able to make it down and finally I did come to do about four or five shows in Capetown and Johannesburg, and what was amazing about it was when we’d start to play….because I didn’t carry a vocalist with me on that trip, it was an instrumental group….but all the fans were singing these melodies from my tunes and that’s how well they knew the songs and it’s such a musical fan base down there. They just love music, they know music, and they just wouldn’t sit still and it was very inspirational for me.

JazzMonthly:  Wow, don’t you just love that.  That’s gotta be a sweet feeling, man, when you travel that far and they know your songs, you know?

LR:  Absolutely, I’ve never been there before, so it was just great….because you never know what to expect when you go to a new country. 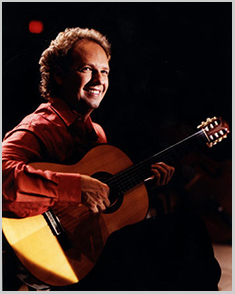 LR:  Yes, when I was actually down there, there was a bit of a jamming going on because there was a couple of jazz-type festivals where they had African groups, and backstage before the actual shows went on was when some of the best grooves were taking place with us doing some impromptu jamming, and I think that gave me the confidence to delve into a little bit of the African influence that I used on the record because I had spent years sort of cultivating the Brazilian sound and understanding that genre of music and spending years going back and forth from Brazil. But even though I loved African music in general and was listening to a lot of  different of artists from there, I didn’t feel confident that I could be genuine in representing the style for that country, but once I started jamming and saw the rhythmic basses, and since I’m such a rhythm-oriented guitarist, I found my connection and I was able to take that and run with it, so it was very inspirational.  And when I was down there I heard a female singer named Zamajobe and this was quite an interesting story.  I couldn’t sleep one night because of the incredible jet lag and I turned on the TV at four in the morning or something and saw four videos by this young lady.
They were featuring her late at night on the MTV down there. And she’s 21 years old and she was the new artist of the year down there and had a big hit record, and I didn’t meet her when I was there, I just immediately wrote down her name because I was really impressed with her singing and her whole style that was combining English and African-influenced flavors.  So when I came back and started working on the album, I got in touch with her and her record company and her producer, and we ended up sending tracks to each other over the Internet and we worked together and she sang on several songs on the record.

JazzMonthly: Let me just roll off a few of the artists on this project because this is quite impressive.  This looks like an awards show lineup.

LR:  Yeah, the grandson of the great Antonio Carlos Jobim, and that was another interesting story because I wanted to include a fresh new Brazilian song and I literally knew Daniel since he was really a kid, and of all the Jobim family since Antonio Jobim died, I think Daniel has carried on that special spark of the Jobim melodies and flavor better than anyone in the family, and Daniel is in his late 20s, early 30s and so talented and yet sort of fresh and modern, and he sent me this new tune that he had written and it turned out to be perfect for the album. And we invited another great Brazilian artist named Joyce to sing the female part on the song, and then we combined that with a track with Dave Grusin and Jon Patitucciand Alex Acuna and Vinnie Colaiuta and Paulinho da Costa.

JazzMonthly: Yes, and I cannot leave out your son (Wesley Ritenour). Wow.  (Both laughing.)

LR:  Well, that was actually another inspiration for the album.  My son Wesley has just turned 13.  He was 12 during the recording of this record and he is quite a drummer already and has been studying drums since he was four, but he’s also very interested in African percussion and studies percussion. He also loves Indian tables and our favorite concert to go to this year was Ravi Shankar, so he has quite a variety of tastes for a young man, and his enthusiasm of drums and percussion was also a key link, and I ended up using about seven or eight percussionists on this record, plus Wesley made his debut as a drummer, and I didn’t force that.  It happened quite naturally when we were recording a percussion part with another player one day and he was in the studio and started playing a groove on the drums and we all decided that that fit quite nicely and he put on the headphones and played to the click track like a little pro and it just happened.

LR:  Thank you very much. That’s one of the names of the tunes which he happened to co-write.

JazzMonthly: Yes indeed.  Well, congratulations to him. So just talk to me a little bit about having a son play on your record.  I mean, that’s not something that happens every day. So when you have a son in the business, you might say, or on your track or on your project, does it tend to make you a different dad?

LR:  Well, I see a lotta things that he’s doing that I did at the same age as him. When I was around 13 years old I went to the Stan Kenton Clinics out in Redlands, California, and got an introduction to jazz big band music back then, and just this summer he went to the Stanford Jazz Clinic so it was a very similar kind of thing, and so I see reflections of myself. But for him and for me it’s sort of taking all this with a grain of salt because it’s sorta like the family business a little bit.  I’m not pushing him to be a musician, he’s totally in love with it, and it’s sort of like that’s what he does and it’s sorta like almost natural like getting up and eating breakfast or something. It’s just in the blood and there’s music in the house all the time and there’s lots of drums all the time. (Both laughing.)

JazzMonthly: So, now, you used just a ton of guitars on this project.  How many guitars did you use?

LR:  It’s about a dozen guitars and that was unusual for me too. I used to use quite a few guitars on some of the earlier records and as I was honing my sound in the latter records, it would be more directed towards maybe one, two or three guitars, but this time I did a lot of orchestrating with acoustic guitars and what we call baritone guitars tuned to a lower pitch and high string guitars, which is tuned naturally higher, and made a purpose of….because the album was so rhythmical and so rhythm-oriented with the drums and percussion, the guitar was a good way to keep that rhythm going and was better suited for a lot of the songs than adding like keyboards, for instance.

JazzMonthly: Yes.  Well, this is a great project.  My favorite tracks on here, of course, the title track, I love “Capetown,” love that vibe, “Southwest Passage” and “Motherland.”  Man… 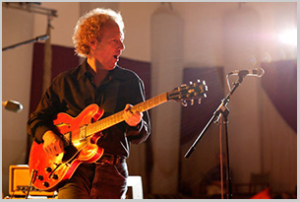 LR:  Yeah, I’ll tell them your thanks.

JazzMonthly: Please do, my friend.  Well, now, let’s see, the record is out, right?

JazzMonthly: August 22nd.  Great, because this is one that no one would want to miss.

JazzMonthly: Yes indeed.  So, now, you’re touring with this record?

LR:  Yes, August and September up and down the West Coast, later on in the year in November down to Florida for some shows and then late November/December off to a big Far East tour that takes me all over the place, and more U.S. dates will be added probably in October into November.

JazzMonthly: Well, Lee, thank you so much for this great record, for your time to talk about this record, and congratulations to your son Wesley and everyone that had a hand in this great project, my friend.

LR:  Thanks for the great interview.  Thanks very much.