We were all eagerly waiting for a new album by contemporary jazz guitarist Les Sabler, and once again Sabler and his musical colleagues delivered. The album on New Vista Records is called “Tranquility.” This record is quite appropriately titled, for listening to it gives us a peaceful contentment, an inner calm, and a feeling that “all is right” in this world of music.

Yes, it’s the same masterful Mr. Sabler who has pleased us with his records for many years now, but you’ll hear a different “sounding” guitar artistry by him here. Legendary producer, guitarist, percussionist, composer, and two-time Grammy winner Paul Brown suggested to Les to use his vintage Gibson Johnny Smith model guitar on these recordings. What a fantastic suggestion that was! It is the perfect guitar “voice” for the tracks on “Tranquility.”

Mr. Brown didn’t just suggest that Les use that classic guitar.  He is also the producer and guiding light on this delightful album. He is the co-composer on many of the tracks, and a performer on most of the tunes as well. Joining Les and Paul is a group of superb musicians including native New Orleans musician/composer Shane Theriot who along with Sabler and Brown wrote the opening track—“Crescent City Strut.” This homage to Theriot’s hometown brings the spiciness, mystery, intrigue, and “flair for fun” of New Orleans to musical life. A special highlight of this tune is the spirited horn section, and of course Les and his signature matchless groove throughout. 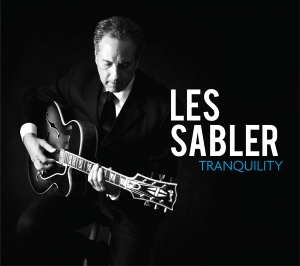 “City Rhythm” has a lot of groove-appeal also. You will hear Paul Brown on wah wah guitar. Brown’s glides and wah wah tonal frequencies are presented thoughtfully and tastefully as an “under-bedding” to the tune as a whole. “Esselle’s Dance”is a soft, subtle, Latin-tinged offering. Sabler’s voicings on this one are particularly wonderful. “Where Has She Gone”has a haunting bridge section that gives the listener that feeling of longing and “if only” wistfulness that only great, great performers can create. “Sunrise”  by George Benson is the only track on “Tranquility” that could be considered a “cover” song; though the word “cover” doesn’t seem quite correct in describing Les and his bandmate’s approach to the Benson classic, for they truly make it almost a new composition. Still it’s a fine tribute to a guitarist whom Les has admired and respected for many years. The horn arrangement, deep groove, and cosmopolitan flavor make this an excellent tune with which to close out this excellent album. The title tune,“Tranquility” has a relaxed, “feel good” beat whichtruly exemplifies what Les Sabler is all about…musical honesty.

This brilliant album alsofeatures Gordon Campbell’s drums, Lenny Castro’s percussion, Roberto Vally’s bass, Greg Vail’s and Mark Douthit’s respective saxophones, Lee Thornburg’s trumpet and flugelhorn, and an ensemble of other virtuoso artists—all working together to create a true musical “oil painting!” Les Sabler once again displays his very generous spirit in sharing the spotlight with his colleagues, and wanting them all to shine on his album.

This record ,“Tranquility” is an aromatic expression of coolness, and it demonstrates that Les Sabler has amazing chops and musicality on any model of guitar he plays!