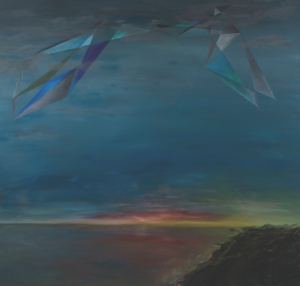 That's a Computer (October 19, 2018 on Outside in Music) takes its title from a comment made by one of Pino's professors at the Juilliard School. The teacher, himself a respected instrumentalist and revered jazz veteran, dismissed the work of one of Pino's idols with those three sneering words. At least it put the young saxophonist in good company – the same professor had derided Pino's own playing in similar terms, despite never sharing his wisdom with Pino directly.

"It's like they say, you never want to meet your heroes," Pino says. "I never even met this professor, but he would apparently hear me play at school concerts and always infer that I had a lot of brains but not a lot of heart. He never addressed me, never introduced himself, apparently had no interest in trying to help me with whatever deficiencies he thought I had, which has been a piece of sand in my clamshell for years. So I wanted to turn it around and make it a self-affirmation." 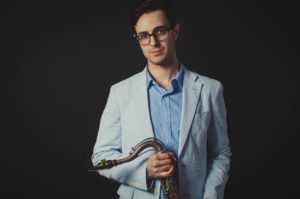 Lucas Pino
New York City-based tenor saxophonist Lucas Pino has led the inventive No Net Nonet for the better part of a decade, maintaining a monthly residency at Smalls Jazz Club in NYC since March 2013. At the same time he's performed as a sideman for artists including Lea DeLaria, Gideon van Gelder, Takuya Kuroda, Richard Boukas, David Lopato, Lauren Desberg, Rafal Sarnecki, Nick Finzer, Jeremy Siskind, Dave Baron, Alex Wintz, Jorn Swart, Marike van Dijk, and Florian Hoefner. He also plays frequently with Bryan Carter & The Young Swangers, and the Steven Feifke Big Band. Pino has shared the stage with such legendary artists as Dave Brubeck, Curtis Fuller, Benny Golson, Jimmy Heath, Christian McBride, Carl Allen, Benny Green and David Sanborn. Originally from Phoenix, Arizona, Pino grew up singing hymns in church and in the choir at school. The first music he ever listened to was jazz, and he started playing saxophone at age 10. As a high school junior, he won the DownBeat Student Music Award for Best Instrumental Soloist in 2004, and went on to attend the Brubeck Institute, finishing his Bachelor of Fine Arts degree in Jazz Performance at The New School in 2009. He received a Masters of Music from Juilliard in 2011. Pino has since traveled the world, performing in Japan, Australia, Poland, Spain, Britain, The Netherlands, Brazil, and Costa Rica, as well as throughout the United States and Canada.