"This is a special night for Mack Avenue. We couldn't be more proud of
Billy Childs, Christian McBride, and Cécile McLorin Salvant for their wins in the
Best Jazz Instrumental Album, Best Large Jazz Ensemble Album, and
Best Jazz Vocal Album categories. With eight nominations we've
had butterflies since the nominees were announced!
We salute every one of them."
-- Denny Stilwell (president, Mack Avenue Records) 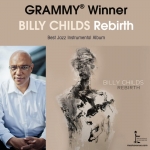 "Childs' playing is simultaneously a powerful anchor
and an introspective lead voice..." -- Stereogum

"...Childs is what you might accurately describe as commanding, a talent
as well-versed in classical composition as he is in jazz." -- DownBeat

Since his first recordings of the 1980s, Billy Childs has developed into one of the most distinctive and distinguished composers of our time. An accomplished symphonic writer, he has also amassed a career's worth of jazz originals that can swing hard, dazzle with intricacy, touch you with direct simplicity, or mesmerize with crystalline lyricism. On his Mack Avenue debut album Rebirth, Childs reaches back to the start of his almost astoundingly varied musical experience-leading a small jazz band of state-of-the-art musicians with his piano playing.

At his musical core, Childs is an improvising pianist. He has the ability to equally distill the harmonic and rhythmic languages of classical music and jazz into his playing. The wide-ranging vocabulary on some tracks begs the question of Childs' love of classical music; "I'm not just jazz," he stresses. His insistent pulse and melodically probing introduction to song is a key to the Childs' musical identity: open to extended harmonic possibilities as they come along, taking a flexible approach to time and leaving an open door for input from his bandmates.

A Los Angeles native, Childs grew up in a home hearing his parents' musical tastes: Bach, Stan Getz and Antonio Carlos Jobim, the Swingle Singers. As Childs developed, he was deeply touched by the music of Emerson, Lake & Palmer, the Modern Jazz Quartet and Laura Nyro, among other contemporary musicians. As a young player, Childs took his bandstand boot camp in the bands of trombonist J.J. Johnson and trumpet titan Freddie Hubbard. While his compositions and orchestrations have taken Childs into a realm that transcends jazz venues, the fact remains that the improvising pianist is largely the product of his tenures as band pianist with those two late masters. 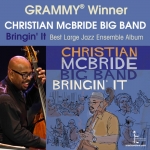 "Mr. McBride plays the upright bass with deft assurance, and
leads his bands with avuncular discipline." -- The New York Times

"Far more than a vanity project, it's another milestone in the
career in one of the most important working musicians today,
regardless of genre." -- PopMatters

Iconic bassist Christian McBride has been doing what the title of his upcoming big band album implores for years: Bringin' It. This highly anticipated release, which follows the Christian McBride Big Band's 2011 Grammy® Award-winning debut, The Good Feeling, puts his status and skills as an all-around entertainer on full display.

A key aspect that has helped the bassist find his voice as an arranger is the fact that, except for drummer Quincy Phillips, this is the exact same band that recorded the big band album with him six years ago. "These guys know my sound. They know my style. They know what my compositional and arranging DNA is. I've been able to keep the exact same unit, so like Duke Ellington used to do, I can write for my guys because I know their sound and style."

While the music played by the Christian McBride Big Band is on the cutting edge of 21st century large ensemble music, the orchestra's presentation, like its sound, respects the past while looking forward. Danny Ray, the legendary stage announcer for James Brown, travels with the group to give the leader an old-school intro before playing his thoroughly modern music.

With a list of growing accolades including his recent appointment as Artistic Director at the Newport Jazz Festival, hosting shows on SiriusXM ("The Lowdown: Conversations with Christian") and NPR ("Jazz Night in America," as well as frequent online contributions to various programs including "All Things Considered"), speaking engagements, and occasional DJ performances under the alias DJ Brother Mister, he's more than just a bandleader: Christian McBride is transcending that title to something more complete. 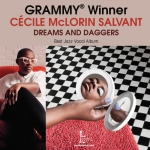 "Only a few years into her career, the singer has absorbed the
music's history and made it her own." -- The New Yorker

"...a master class in entertainment as confrontation: impossible to turn away
from her captivating performance, which made it impossible to ignore the
enduring relevance of each song's straightforward indictment
of American society." -- Billboard

GRAMMY® Award-winning vocalist Cécile McLorin Salvant has had a remarkable rise to stardom in her professional career, and she took another big leap forward with Dreams and Daggers, her third album for Mack Avenue Records.

"The songs on this album are of dreams and daggers. The daggers have been used at times to attack, at times to defend. For power, no doubt, to take it, to keep it. The dreams are the ones I caught looking out a window, or from the light sleep before the deep. I don't always know what they mean, but they are the ones I was able to keep. And yet dreams can be desires too. I wrote them down to make them true. That we may bring our wildness into view. That we may be unruled and unruly," explains McLorin Salvant.