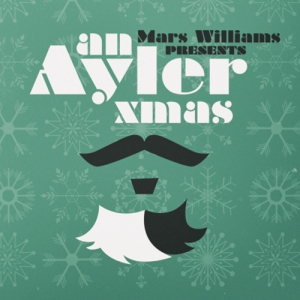 Albert Ayler (1936-1970) took jazz to its extreme. In fact, the saxophonist could be said to have brought jazz beyond its logical “end” while coming back again at its beginning. His groups, particularly the one he had during 1965-66 with his brother trumpeter Donald Ayler, used simple folkish melodies that launched intense free improvisations, sounding a bit like a runaway New Orleans jazz band circa 1910.

Tenor-saxophonist Mars Williams uses a similar approach along with a very original concept on this CD available from www.marswilliams.com. On three medleys with his septet, he alternates between Albert Ayler songs and Christmas melodies. For example the first 14 minutes starts with “Ma’oz Tzur (Hanukkah),” it becomes Ayler’s “Truth Is Marching In,” and concludes with bits of “Jingle Bells.” “O Tanenbaum” and the “Twelve Days Of Xmas” sandwich Ayler’s “Spirits” while “Angels We Have Heard On High” is joined by “Omega Is” and “Alpha.”

The fiery group improvisations find Williams’ band sounding a bit like Ayler’s, at least in its concept. Williams is joined by cornetist Josh Berman, cellist Fred Lonberg-Holm, Jim Baker on piano, synth and violin, bassist Kent Kessler, drummer Steve Hunt, and Brian Sandstrom tripling on bass, guitar and trumpet. The themes pass by quickly before the music emphasizes Williams’ intense tenor flights with constant comments and reactions from the rest of the group.

While I wish that the Xmas themes were explored a bit more (perhaps in a modern Dixieland fashion), this EP (which totals 31 ½ minutes of music) will
certainly hold the interest of open-eared listeners, particularly those with a sense of humor.