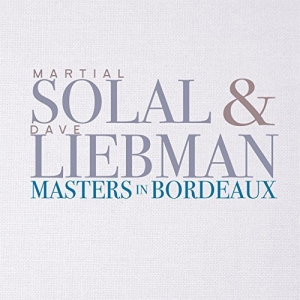 Although it was not inevitable that they would record a duet album together, pianist Martial Solal and saxophonist-flutist Dave Liebman have a fair amount in common. Solal, who at the time of this recorded concert from 2016 was a few weeks short of turning 89, has been a major jazz musician from France from at least the early 1950s. While he worked along the way with Django Reinhardt, Don Byas and (in a classic album) Sidney Bechet, he has
long been a very modern pianist who stretched beyond bebop by the late 1950s. While retaining his roots in earlier jazz styles, he has long had his own musically curious style, chord voicings, and personal way of improvising.

Dave Liebman, a comparative youngster at the time of the concert who was a month shy of his 70th birthday, is masterful on tenor, soprano and flute. Among his most famous associations have been Elvin Jones, Miles Davis (in the early 1970s), and many projects through the years with pianist Richie Beirach. While John Coltrane has been a long-time association, Liebman sounds comfortable and individual whether playing standards or in free form situations.

On this live recording from the Sunnyside label (www.sunnysiderecords.com) from the 2016 Jazz & Wine festival in Bordeaux, Solal and Liebman spontaneously picked out six jazz standards to explore. Their approach generally finds them starting out with a fairly free introduction, playing the theme and then, even during the most abstract moments, keeping the melody close by. While listening to such songs as “All The Things You Are,” “Night And Day” and “What Is This Thing Called Love,” one can always hear the theme during their improvisations.