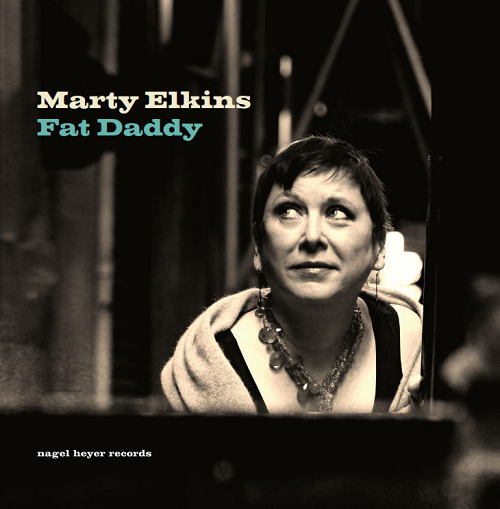 Vocalist MARTY ELKINS has a special affinity for older jazz and swing tunes. She has a liquid, bluesy voice that is the perfect vehicle for standards originally sung by artists like Alice Faye, Ella Fitzgerald, and Ethel Waters. Although the 14 songs on Elkins’ newest CD, FAT DADDY were all written between 50 and 90 years ago, she makes them feel as fresh and relevant today as ever.

Elkins opens the CD with her swinging version of “You Turned the Tables on Me,” which was first recorded by Alice Faye in 1936. Elkins chose to include “On Revival Day” after hearing LaVern Baker’s recording of it on her 1958 “LaVern Baker Sings Bessie Smith.” “How Can You Face Me” is a Fats Waller tune from 1936, and “That’s All There Is To That” is a Clyde Otis/ Kelly Owens tune that was originally released by Dinah Shore in 1956. “It’s Too Hot For Words” was first recorded by Billie Holiday in 1935. Holiday also recorded “Trav’lin’ All Alone” in 1937, and she recorded around 14 versions of “I Cover The Waterfront.” “Cow Cow Boogie,” which is associated with Ella Fitzgerald, was written for the 1942 movie “Ride ‘em Cowboy.” Ella also made famous “It’s A Pity To Say Goodnight,” which was originally recorded by Dorothy Squires in 1946. “My Old Flame” has been recorded by many artists. It was composed in 1934 by Arthur Johnston (music) and Sam Coslow (lyrics) for the film "Belle of the Nineties." It was originally sung by Mae West accompanied by Duke Ellington’s orchestra. Billie Holliday also did several versions of it. “Fat Daddy” is a fun tune first performed by Dinah Washington. “These Foolish Things” is another widely recorded tune. It was written in 1936 by Englishmen Jack Strachey and Eric Maschwitz, who was romantically linked to the Chinese-American actress Anna May Wong while working in Hollywood. The lyrics reflect his longing for her after they parted and he returned to England. “I Can’t Face the Music,” recorded by Ethel Waters in 1926, is one of the oldest songs on this disc. “Sugar," also known as "That Sugar Baby o' Mine,” was also recorded in 1926 by Ethel Waters. “Trav’lin’ All Alone” was written by James C. Johnson in 1929 but made popular by Billie Holiday 1937.

Elkins is joined on FAT DADDY by some old friends with whom she often works, including JOEL DIAMOND, a prolific producer, composer and pianist who has worked with a range of vocalists including Jane Olivor and Gayle Winters. He produced this CD and joins Elkins on piano and organ on several tunes. JON-ERIK KELLSO on trumpet performs with Vince Giordano's Nighthawks. Guitarist JAMES CHIRILLO has worked with many of the swing era’s greats, including Benny Goodman, Buck Clayton, and Benny Carter, among others. STEVE ASH, who also plays piano on this disc, was selected by The Kennedy Center and The U.S. State Department to tour West Africa and France as part of The Jazz Ambassadors in 2004. Bass player LEE HUDSON is a busy touring and recording artist who performed with Lou Donaldson, Illinois Jacquet, and Dizzy Gillespie, among many others. Drummer TARO OKAMOTO has played with such jazz notables as Reggie Workman, Duke Jordan, Barry Harris, Billy Harper and Eddie Henderson. Veteran percussionist LEOPOLDO FLEMING is perhaps best known for his performances with Nina Simone, with whom he worked for 17 years.

Stephen King said, “Sooner or later, everything old is new again,” and Marty Elkins demonstrates just how that’s done by making the chestnuts on FAT DADDY sound as fresh as the day they were minted. Her straight ahead, smoky interpretations create a stimulating immediacy, because she imbues these songs with a naturalness and sense of sheer fun that only an experienced artist can evoke.