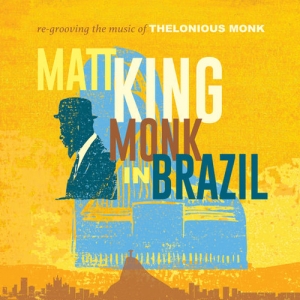 Many jazz artists had their centennial in 2017 including Dizzy Gillespie and Ella Fitzgerald, but somehow it has ended up being the year of Thelonious Monk. Unlike Ella (whose talent has never been duplicated) and even Dizzy (who did write a few standards in addition to playing phenomenal and always-modern trumpet solos), the focus has often been on Monk’s music. His compositions can be interpreted in a countless number of ways even if very few have ever sounded like Thelonious on the piano.

A CD titled Monk In Brazil may conjure up the thought of someone merely tacking bossa-nova rhythms onto Monk’s compositions. Fortunately pianist Matt King went a lot further, utilizing a variety of top Brazilian players while keeping the essence of Monk’s music, particularly its unique melodies. On most songs King teams up with either Itaiguara Brandao or Nilson Matta on bass and Mauricio Zottarelli or Adriano Santos on drums. Two songs add a pair of percussionists, guitarist Chico Pinheiro helps out on two other numbers and particularly valuable is Anton Denner who plays soprano, alto, piccolo, clarinet or alto flute on one song apiece. His soprano playing on “Four In One” is particularly impressive and, on “Jackie-ing,” he takes what is probably the most substantial piccolo solo ever on a Monk song.

Although “’Round Midnight” and “Bemsha Swing are here, King also concentrates on some of the most difficult of the Monk tunes including“Work,” “Skippy,” “Played Twice” and “Let’s Call This.” He does not seek to emulate Monk on the piano or (during three songs) his fluent melodica, but plays in his own style while never losing sight of those strong melodies. His rhythm section is both subtle and swinging and Denner’s horns along with the percussionists add variety to the performances which includes a haunting and atmospheric “Crepuscule With Nellie.”

It all works quite well, casting some of Thelonious Monk’s finest songs in a new light. Monk In Brazil is easily recommended and available from
www.mighty-quinn.net.