A graduate of Kent State University where he studied music, tenor-saxophonist Matthew Alec was a founding member of the soul and funk band Winslow, playing with the group for 12 years. In 2017 he formed Matthew Alec and the Soul Electric, a sextet which also includes keyboardist-singer Brian Woods, guitarist-singer Steven Forrest Sanders, bassist Jared Lees, drummer Leon Henault, and percussionist Jeremiah Hawkins. The band defies easy musical categorization, gliding easily between modern jazz, r&b and funk. Since they are based in Cleveland and Alec's label is Cleveland Time Records, the title Cleveland Time is a logical one for the band's recording debut. 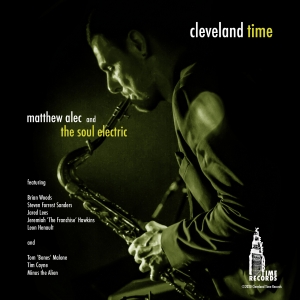 Matthew Alec is in the spotlight during much of the opener, "Give What You Take," leading the ensemble through the funky melody. "Baby You Got Me" is a feature for Brian Woods' soulful vocal which builds and builds throughout the piece; Alec also has a brief spot on the EWI. On "Cleveland Time," which features the leader's passionate tenor and some heated electric bass lines from Lees, the band welcomes guest trombonist Tom "Bones" Malone.

During the mournful "Never With You," the saxophonist puts plenty of feeling into the ballad yet shows subtlety in his impressive statement. "Enigma Man," which has a good-time vocal by Seven Forrest Sanders, is followed by a tribute to the late great pianist McCoy Tyner, "Blues For McCoy." The latter piece gives the group a chance to stretch out on a post-bop blues that one could imagine Tyner playing. Both Alec (taking his strongest solo of the program) and trumpeter Tim Coyne explore the stratosphere a bit. The enjoyable and diverse set closes with "Sunshine On Prospect," a bit of joyful and celebratory dance music.

Cleveland Time is a strong start for Soul Electric. It will be interesting to see in what musical direction the group goes next.