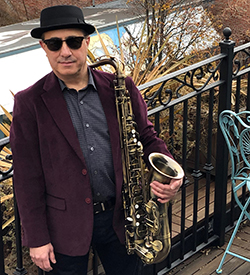 Baby boomer Michael Alan grew up listening to '70s and early ‘80s rock and pop. His musical obsession was and still is, The Beatles. In college, Michael was exposed to all types of jazz and fusion by teachers and fellow musicians. His interest in using computers to create music inspired him to work with synthesizers, MIDI and hard disk recording when the technology was still very new.

Michael Alan’s new release, “Distant Worlds” just draws you in and is Pure Vitality Throughout!

"Distant Worlds allowed me to bring all my musical skill sets – sound designer, musician, engineer and producer - into a single project that showcases my jazz, pop and rock influences and the many facets of who I am as an artist".

We would like to welcome Michael Alan to JazzMonthly.com.

Jazz Monthly: You were a saxophone student at Berklee College of Music and you had many influences growing up. When did you actually start playing a musical instrument? What was the instrument? How did all this lead up to becoming a recording artist?

Michael Alan: The short version of that story is I started out as a drummer playing mostly outside of school, while playing bass clarinet and tenor sax in the school bands. By age 15, I was playing gigs on drums. By the end of my senior year in high school I pretty much gave up drums, and tenor sax became my main instrument. Also, while in high school, I had a Hammond A-model organ, Leslie 122 and a Korg MS-20 monophonic synthesizer that I played in my rock band. At Berklee, tenor sax was my principle instrument and made flute my double. In my second year of college I sold my Hammond and bought an electric guitar and taught myself well enough to play rhythm guitar as a double on top 40 gigs. After college I kept up with all the innovations in DAW recording technology and by the time I started recording Distant Worlds many years later, I had already engineered, produced and mastered many albums for other artists.

JM: The more we listened to your new project DISTANT WORLDS the more our favorite song kept changing. Your melody and energetic instrument blends really captivate. What’s your secret?

MA: As a sax player I love playing songs with strong melodies. When composing I try to create songs with melodies that are memorable and stand on their own. As for instrumentation I let the song dictate what instrument needs to play the melody. Most times tenor sax is used but alto and soprano sax, flute and EWI find their way too. On Morning In Tunisia for instance, I imagined nylon guitar playing as a duet with the tenor sax in the A-sections and flute and soprano sax in the B-sections, so that’s what it became.

MA: I really don’t have a preferred method of writing music. I get inspiration in many ways. Sometimes a melody will pop in my head and I’ll grab my phone and sing it or play it on my horn into the voice memos app. Most times I'll start with guitar or piano. There are also times I’ll have a groove in mind so I'll start off building a drum track and go from there.

JM: Talk To Me – is a strong “Get-up-and-dance” opening track. Pure Vitality! What was the inspiration behind writing and recording this song?

MA: All I knew when I started writing Talk To Me is that I wanted something upbeat. I began with just a Wurlitzer piano sound writing the chord changes, then adding drums and bass. The Juno-60 brass stabs came next. The melody came shortly after by playing with it on tenor sax. The percussion breakdown section and tom-tom solo just happened organically. To me it was just a natural progression of what needed to come next. It wasn't until I was almost finished recording the whole song that I realized I wrote an instrumental pop-jazz samba.

JM: On this project you covered “My Love” and really gave a great performance with a smooth rhythmic warmth.  Was there a special importance to you to record “My Love”? What were your thoughts behind this choice?

MA: Basically, I chose "My Love" because it's such a great composition and has an amazing melody, not to mention it is one of my favorite McCartney songs. I also love how the melody sounds with the sax as an instrumental. I changed up the groove and instrumentation but kept the original form. I paid homage to Henry McCullough's famous guitar solo by playing some of the licks he used, which helped make it the great song that it is. My Love is a good example how a solo can become an important part of a songs legacy. Just like what Phil Woods alto sax solo did for Billy Joel's "Just The Way You Are".

JM: It’s great to see you highlighting the fact that drum programming and MIDI played a big part in this production. Your drum programming is outstanding! Is this something that you learned over time? What was the approach? And, how long did it take to program one song?

MA: See answer to question 1 (haha)! Because I started out as a drummer, I think like a drummer when programming or playing drum samples using MIDI. I know what the groove is going to be in my head beforehand. Then I build it one or two drums at a time starting with kick, snare, hi-hat, etc. for each section of the song using my MIDI keyboard controller. I usually start out with something simple enough to build the rhythm section but then expand on it, adding fills, percussion and loops. Sometimes I will change out a kick or snare, or replay a fill if I decide it isn't working or come up with a better idea. It's always a process!

JM: " Track 9 "Distant Worlds" shows your skillful ability to create an atmospheric type orchestral film score. I was waiting for more after hearing this short uplifting theme. We are all curious as to why not to extend this great track?

MA: The "Distant Worlds" track originally started out as a short ethereal intro for the song "Something You Said". It was written at the same time and was part of the song. At some point I decided to separate them while still using what is now Distant Worlds as a lead-in and crossfade it into "Something You Said." This also allowed me to expand on the new Distant Worlds track to give it a melody and other elements that it didn't have before. The composition also fits really well with the album artwork and title (which was already finished). I guess it's one of the rare instances that a title of a composition came from the album title and not visa-versa. Since it was already sort of a stretch genre wise for this kind of album, I didn't want to go to crazy with it. I thought 45 seconds was just enough! 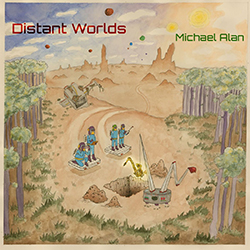 JM: DISTANT WORLDS was produced, recorded, mixed and mastered by you. What type equipment and software did you use to record mix and master this terrific project? When mixing, do you mix and get a “final mix” before mastering… or do you mix with the mastering plug-ins already fixed on the Master Mix Fader… or something different?

MA: I use a Mac running Steinberg Cubase Pro with Universal Audio hardware for recording and mixing. For mastering I use Steinberg Wavelab Pro. When I mix I do get a final mix before mastering and think of mixing and mastering as two totally separate processes. On the master buss in Cubase Pro I typically use the UA SSL 4000 G Buss Compressor and Waves L2 Ultramaximizer as my limiter. As a mastering engineer, I've seen L2 misused a lot on the master buss before it goes to mastering. I use L2 just to get my mixes at a consistent level to around –3 to –5 dB so I have enough headroom for mastering. On most songs I also use the UA Ampex ATR-102 Master Tape Recorder on the first slot of the master buss in Cubase Pro, so that the mixes sound more "analog". The plugs I use for mastering in Wavelab Pro is the Wavelab Pro multiband compressor and EQ's, the UA Sonnex Oxford V2 Limiter and the iZotope MBIT + algorithm for dithering. I try to get my mixes sounding the way I want them as much as possible during the mixing process so that I'm not using a lot of compression and EQ in the mastering stage.

JM: What is the message you want to tell from your latest spirited release, “DISTANT WORLDS”?

MA: It was important for Distant Worlds to reflect who I am as a musician, composer, engineer and producer and not just highlight me as a saxophone player. Although I love many albums whose focus is to highlight an artist's ability on their instrument, this album is a "whole package" concept for me. When people listen to Distant Worlds I want them to enjoy the "vibe" of the album and the songs, while also enjoying the many elements contained in each track, and not just focus on a single instrument.