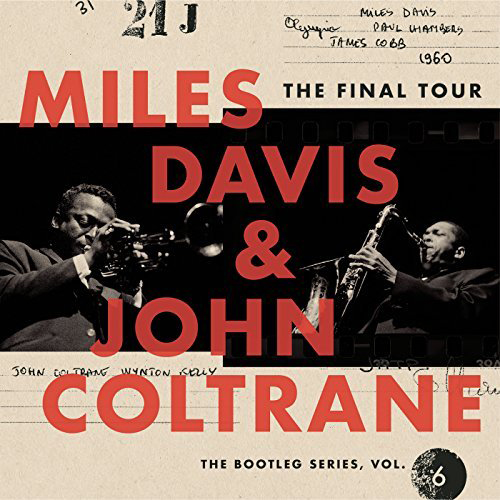 In 1960, John Coltrane faced one of the turning points of his career. A member of the Miles Davis Quintet and Sextet during 1955-56 and since 1958, Coltrane had recently recorded his monumental Giant Steps album and was more than overdue to go out on his own. However, Miles Davis needed Coltrane for a European tour which would be the first time that the trumpeter was booked as a bandleader overseas. Coltrane reluctantly agreed even though he was bored playing Davis' repertoire. Once the tour was over, the tenor-saxophonist formed his own quartet and made history on his own.

Fortunately, the Davis Quintet was well documented during their overseas tour on radio broadcasts, allowing one to hear the group (which also included pianist Wynton Kelly, bassist Paul Chambers and drummer Jimmy Cobb) stretching out at several concerts. The Final Tour, a four-CD set from Columbia/Legacy subtitled The Bootleg Series Vol. 6, has all of the music from performances on Paris (Mar. 21), Stockholm (Mar. 22) and Copenhagen (Mar. 24), five concerts in all since the band played two shows apiece in Paris and Stockholm.

Last year, one of the top releases was a four-CD set from the British Acrobat label titled All Of You; The Last Tour 1960. That particular box also had the Stockholm (Mar. 22) and Copenhagen (Mar. 24) concerts plus slightly later performances from Frankfurt (Mar. 30), Munich (Apr. 3), Zurich (Apr. 8) and Holland (Apr. 9), duplicating around 2 ½ CDs of The Final Tour. Collectors who already own that set may want to think twice about duplicating so much material, but getting the Mar. 21 concert is worth it. The 14-minute version of "Bye Bye Blackbird" is classic with Coltrane really digging into the song and the concert also yielded extensive renditions of "All Of You," "So What" (much faster than the original), "On Green Dolphin Street" and "Walkin'" along with shorter versions of "'Round Midnight" and "Oleo."

The European audiences were a bit confused by John Coltrane's playing because he had grown quite a bit since the recently released Kind Of Blue. While Davis' solos were often melodic and accessible due to his often-muted sound, Coltrane was very explorative and could sound a bit furious even though he was actually soft-spoken. During the Paris concerts, there are times when members of the audience were actually debating about Coltrane's playing and his improvisations were met not only with applause but some whistles and even boos. It would take another year for the Europeans to catch up with the saxophonist. However they had no trouble appreciating the playing of the joyously swinging Wynton Kelly Trio.

While there is some duplication among the titles from concert to concert ("So What" appears four times), every performance throughout this release is well worth hearing. And as a bonus, John Coltrane is heard in an interesting six-minute interview.

Perhaps the other European concerts covered by the Acrobat set (and the second concert from April 9 that was left off) will be covered in a future entry in the "Bootleg Series." In the meantime, this is exciting and historic music that deserves to be heard. But how can one go wrong with the combination of Miles Davis and John Coltrane?