Doing anything for 25 years is pretty amazing. Being on the radio for 25 years is very amazing! Doing what you love to do consistently, and doing it brilliantly at the same radio station for 25 years is more than just amazing; it is truly a tremendous achievement! May 24th marks this milestone anniversary for Monifa Brown! Since 1996, she has been sharing her beautiful talent and spirit with us as an on-air personality, jazz presenter, and sensitive force for humanity, for two and a half decades at Newark, NJ based public radio station WBGO-FM/Jazz 88.3 FM. 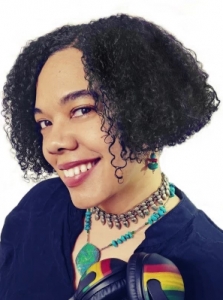 Monifa is the host of “Saturday Afternoon Jazz” from 2 to 6 pm Eastern Time, and online at wbgo.org. Her program is a pleasing conversation with her listeners. Monifa creates a kind of “on-the-spot-poem" for the individual tunes. She has a joyful way of offering a vignette and or personal anecdote of each song we previously heard. This is one of the many reasons why her audience has been loving her in return for these 25 years.

Her love for jazz began when she was just a little girl growing up in Brooklyn. Her parents used to take her to all of the renowned jazz clubs around NYC. Once inside, this impressionistic, young lady would get a “front row seat” into a world of music and live performances  that has never left her to this day.

She later studied at the celebrated Fiorello H. LaGuardia High School of Music & Art and Performing Arts as a violinist and vocalist. Monifa studied at Temple University in her Dad’s hometown of Philadelphia where she earned her degree in “Classical Voice” (as a mezzo- soprano) and also in “Music Therapy.” It was at Temple that she honed her skills at announcing and broadcasting. She worked at Temple’s radio station bringing her already own rich jazz history to the station which was a 24 hour Jazz station at that time. After graduating Temple, she set out to put her acquired skills to good use and share her passion.

Around that time, she also learned a lot about the field of “Publicity” and “Public Relations.”  She speaks fondly and appreciatively of all of her mentors during those years who taught her and believed in her. In addition to her broadcasting, Monifa has been a publicist for many years. She currently heads the PR department at a major independent and NJ-based record label—“Shanachie Entertainment.”  At Shanachie, Brown has mastered the art of getting media coverage for their varied artists. She says as a publicist, she has to be a true “multi-tasker” and always see the “big picture.”  She also must be the ultimate “diplomat” and truly understand people…be tenacious…and most of all…be patient. Her dual career makes her understand both sides of jazz—as promoter as well as presenter. She is grateful and knows that she is blessed to do both collaboratively, and she is aware that each of her professions works synergistically with the other to make her perform better at each one. 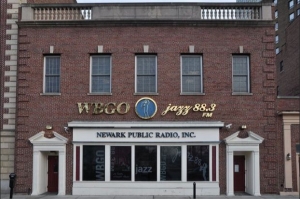 During her tenure at WBGO, she has enjoyed many high points. Some of her favorite moments have included hosting a monthly performance/interview series in Manhattan on the Jazz floor at J&R. There she presented such masters as eminent bassist Ron Carter, the indefatigable drummer Roy Haynes, and the dynamic Terence Blanchard. An unforgettable time was serving as Associate Producer of WBGO’s “JazzSet” with Branford Marsalis, and a priceless memory for her-- interviewing a man she has respected and admired for so many years-- saxophone immortal Sonny Rollins.

Another important career “signpost” began in 2016.  Five years ago, the highly esteemed pianist/composer George Cables wished Monifa a happy birthday. That was a nice gesture, but then she amusingly told the Mr. Cables that a real birthday gift would be for him to write her a song…and much to her surprise… he did! It is called “The Mystery of Monifa Brown” and was released on his “George Cables Songbook” recording.

Monifa Brown, the “Global Jazz Queen” has a signature expression which she often likes to say on her program--“Jazz is the gift that keeps on giving back.” That is exactly what the gifted Monifa Brown has been doing for 25 years… “giving back.”