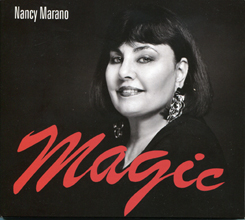 Nancy Marano has been lauded as a distinctive musical talent in a New Yorker profile by Whitney Balliett. She has also been profiled by Billy Taylor and Charles Kurault on the exalted CBS Sunday Morning TV program, The Wall Street Journal, Jazz Improv Magazine, and by NPR “Crossover” in two one-hour broadcasts featuring her recordings and interviews.

Named Top 4 Jazz Vocalists of the Year by IAJE Journal’s Dr. Herb Wong, following the release of her critically acclaimed recording with the 62-piece Netherlands Metropole Orchestra, entitled If You Could See Us Now! which featured the arrangements of Manny Albam.