Few members of the general public know how important an arranger is to music. But Nelson Riddle, born 100 years ago today, was lauded by Ella Fitzgerald and Frank Sinatra and became a household name to lovers of the Great American Songbook. 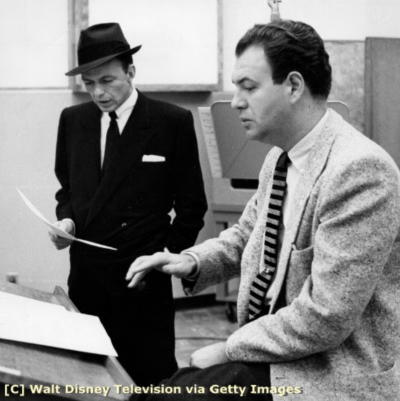 “Arrangers rank among the most neglected people in the music business. Few lay people could name even one. If listed at all, credits for arrangers are often in small print. All but invisible, they rarely appear onstage or in movies or videos. Even books on jazz and American popular song often give arrangers short shrift. The craft is a little known one that, at its best, becomes art.

For several decades, Nelson Riddle, born 100 years ago this week, reigned as one of popular music’s leading arranger-conductors. His work scoring for singers cemented his place in musical history. Ella Fitzgerald applauded him as a “singer’s arranger”; none did more splendid work than Riddle.

What does an arranger do, anyway?

Usually an arranger begins with certain specifications: the name of the song; the key; and perhaps the size and instrumentation of the ensemble. But within these bounds, the arranger may have considerable leeway, deciding on the tempo (a ballad? a medium bounce? a “killer”?); the degree of reference to, or departure from, the original song; the spirit and “feel” (sweet or sharp? droll or solemn? nostalgic or hip?); the overall architecture (include the verse or just the chorus? insert a transitional passage?); the number of instruments that play at any given moment (should the trumpets drop out here?); the volume (softer here?); which instruments state the melody (saxophones? strings?) and which take solos at what points; changes in the original piece’s harmony, melody and rhythm; and Much as each painter contemplating an assemblage of household objects would render a still-life uniquely his or her own, each arranger who tackles, say, Gershwin’s “Summertime” perceives its artistic possibilities in an individual way.

Born to music-loving parents, Riddle took lessons on both piano and trombone, which became his favorite instrument. Like fellow New Jersey native Frank Sinatra, Riddle came up through big bands, in vogue during the 1930s and 1940s. He worked with Nat King Cole on the 1950 hit “Mona Lisa,” and the following year, Capitol Records—known as a singer’s label—hired him as staff arranger and teamed him with Cole full time. The two would create classics like “Unforgettable,” “Pretend” and “Smile.”

In 1953, Capitol coupled Riddle with Sinatra—they recorded “I’ve Got the World on a String” and several others. Riddle quickly became Sinatra’s foremost collaborator over the course of 200-plus tracks. The singer would choose the songs, work out the keys with pianist Bill Miller, and give Riddle some ideas. Then Riddle would retreat to his home writing studio.

Their LPs “In the Wee Small Hours” (1955) and “Songs for Swingin’ Lovers!” (1956) became all-time classics of American music. From the latter, Cole Porter’s “I’ve Got You Under My Skin” stands as one of the most celebrated and delectable fruits of their collaboration; Sinatra himself called it “Nelson Riddle’s shining hour.” You can hear his trademarks: a distinctive introduction, unusual colors (for example, bass clarinet paired with celeste), instrumental lines that stay out of the singer’s way, and catchy rhythmic punctuations. A layered-trombone segue inspired by Stan Kenton’s “23 Degrees North, 82 Degrees West” precedes a glorious, erotic trombone solo by Milt Bernhart. Achieving Sinatra’s desired level of perfection required no fewer than 22 takes.

Riddle paid close attention to dynamics—the degree of loudness and softness. “Frank accentuated my awareness of dynamics by exhibiting his own sensitivity in that direction,” wrote Riddle in his method book “Arranged by Nelson Riddle.” To judge his backdrops for yourself, try listening closely to the orchestral accompaniment, tuning out as much of the singer as you can.

In the 53-track “Ella Fitzgerald Sings the George and Ira Gershwin Songbook,” a matchless treasure of American culture from 1959, Riddle added inventive contrast and nuanced color to Fitzgerald’s lines. Lush and romantic here, as in “The Man I Love”; snappy and swinging there, as in “I Got Rhythm.” In “Love Is Here to Stay,” Riddle effectively marries a jazz band with a string orchestra, using a repeated nine-note riff to help make the song fresh.

Beyond his vocal “charts,” Riddle scored such Hollywood movie musicals as “Carousel,” “High Society” and “Guys and Dolls.” In the 1960s and ‘70s, he wrote for such TV shows as “Route 66,” “The Untouchables” and “Batman” and for a number of films. In the 1980s, he enjoyed a boost when rock singer Linda Ronstadt engaged him to orchestrate three discs of popular standards. He died in 1985, before their final album, “For Sentimental Reasons,” was released.

Riddle’s charts are so accomplished and influential that they are now studied in colleges and conservatories. I think that would reinforce his quiet pride in his undersung profession.”

—Mr. Hasse is curator emeritus of American music at the Smithsonian Institution. His books include “Beyond Category: The Life and Genius of Duke Ellington ” (Da Capo) and “Discover Jazz” (Pearson).

Appeared in the June 2, 2021, print edition of The Wall Street Journal as 'Nelson Riddle’s Backstage Brilliance.'