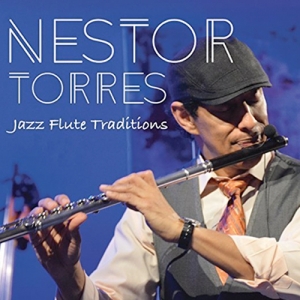 Nestor Torres made his early reputation as a talented flautist who played Latin pop/jazz. Born and raised in Puerto Rico, he moved to New York after high school, attended Berklee, and gained experience playing with a wide variety of Latin groups including salsa bands in Miami. His solo career began in earnest in the 1990s with him recording Latin dance music, salsa and melodic jazz.

For listeners only familiar with those recordings, the mostly straight ahead Jazz Flute Traditions will be a surprise. Torres pays tribute to some of his flute idols, including Hubert Laws who he considers his main inspiration. He is joined by pianist Silvano Monasterios, bassist Jamie Ousley, drummer Michael Piolet and percussionist Jose Gregorio Hernandez, with guest appearances from percussionist Miguel Russell, altoist Iam Munoz and (on one song) drummer Marcus Grant.

The packaging could be a bit better (the names of Yusef Lateef and Rahsaan Roland Kirk are misspelled in the composer credits and the uncredited liner notes fail to mention to whom a few of the songs are connected), but the music is quite enjoyable.

Among the selections on Jazz Flute Traditions are a straight forward version of Moe Koffman’s late-1950s hit “Swingin’ Shepherd’s Blues,” Herbie Mann’s one-chord vamp “Memphis Underground,” the intense groove piece “Jungle Fantasy” which originally featured the early Puerto Rican flutist Esy Morales in 1949, Yusef Lateef’s ballad “The Golden Flute,” and the catchy Rahsaan Roland Kirk piece “Serenade To A Cuckoo.” The latter is one of three numbers that include solos from the excellent altoist Munoz.

The biggest musical surprise is “Sequenza/Gazzeloni” which, after a brief classical melody, features Torres improvising quite freely, paying tribute to Eric Dolphy without copying him. Other performances include “Cute” (for Frank Wess), two numbers for Hubert Laws (“Spain” and “Windows”), a melodic version of Cole Porter’s “So In Love” and the 11-minute multi-sectioned “Miami Beach Rhumba,” a spirited party piece that is apparently not dedicated to anyone.

Throughout Jazz Flute Traditions, Nestor Torres plays in his own voice, shows versatility, and is in top form. This is his best jazz recording so far.