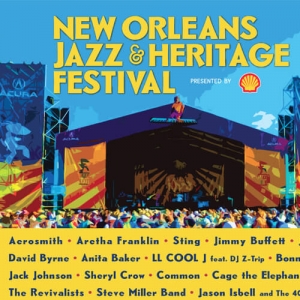 In April of 1970, Mahalia Jackson, often called the greatest gospel singer, returned to her hometown to appear at the first New Orleans Jazz & Heritage Festival. While attending the Louisiana Heritage Fair in Congo Square (then known as Beauregard Square), she and Duke Ellington, who also appeared at the event, came upon the Eureka Brass Band leading a crowd of second-line revelers through the Festival grounds. George Wein, producer of the Festival, handed Ms. Jackson a microphone, she sang along with the band and joined the parade… and the spirit of Jazz Fest was born.

This spontaneous, momentous scene—this meeting of jazz and heritage—has stood for decades as a stirring symbol of the authenticity of the celebration that was destined to become a cultural force.

The 2018 Festival takes place April 27 through May 6 and it will be the 49th annual celebration.