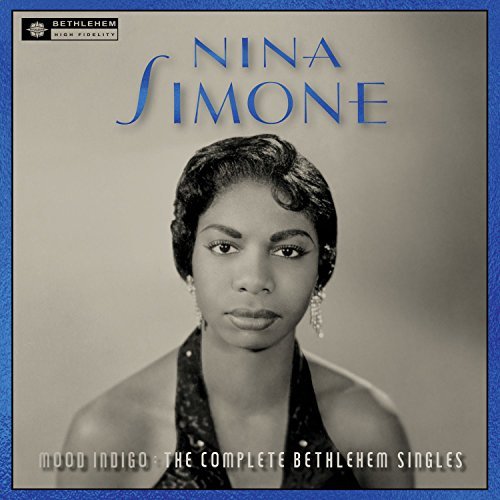 Nina Simone (1933-2003) was unique in music history. She was a classically trained pianist who, due to the racism in the classical music world, found herself having to make a living as a singing pianist in supper clubs. During her peak years (1957-70), her repertoire ranged from jazz, pop, gospel, rock and r&b to folk music and anti-racism protest songs. She managed to make every song she performed sound as if it was written for her. Simone had a difficult life that became quite erratic during her final 30 years, but she remains an influential force 15 years after her passing.

Although two slightly earlier sessions have emerged since that time, Mood Indigo has all of the music from Nina Simone's first official recording sessions in Dec. 1957. The 14 selections were put out at the time as 45s with 11 of the numbers also comprising Simone's Little Girl Blue Lp. The other three songs were released on a sampler album Nina Simone and her Friends.

Joined by bassist Jimmy Bond and drummer Albert "Tootie" Heath on half of the selections while taking the remainder by herself, the 24-year old Nina Simone was already in her musical prime. Her tender version of "I Loves You Porgy" was the biggest seller of her career while "My Baby Just Cares For Me," after it was used in a British television commercial 30 years later in 1987, also eventually became a hit. Among the other numbers are "Love Me Or Leave Me," the cautionary "Don't Smoke In Bed," a spiritual version of "You'll Never Walk Alone," "He's Got the Whole World In His Hands" and three instrumentals ("African Mailman," "Central Park Blues" and "Good Bait").Simone gives each of the songs in this jazz-oriented set her personal touch, sometimes with surprising results.

It would be a few more years before Nina Simone became involved in the Civil Rights movement and caught on big but, as this attractive reissue (available from www.omnivorerecordings.com) shows, she had her own musical personality from the start.