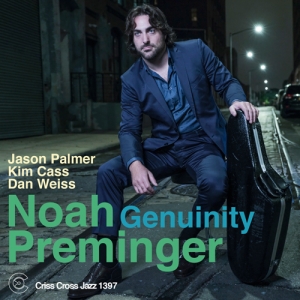 On Genuinity, his tenth release as a leader and his debut on Criss Cross Records, Preminger and longtime collaborators Palmer and Cass are joined for the first time by Weiss. Nine Preminger originals evoke varying moods and ambience with strong melodies and percolating grooves, providing the perfect setting for stunning improvisations by Preminger and Palmer. Released in January of 2018, the recording is yet another stellar chapter in the development of one of our most gifted jazz saxophonists. It's one of three new recordings by Preminger out this year. The others are The Chopin Project (Connection Works Records), the first release by the Dead Composers Club co-led by Preminger and drummer Rob Garcia. They are joined by guitarist Nate Radley and bassist Cass in jazz interpretations of Chopin Nocturnes and Preludes. The other is Whispers and Cries, a duo recording with pianist Frank Carlberg.

Genuinity demonstrates Preminger's versatility as a performer and composer. The recording opens with a richly rendered sax solo by Preminger, declaring the arrival of an astonishing, virtuosic set of original jazz. In "My Blues for You" Preminger shows off his command of traditional blues forms, while in "TS and Her Spirit" and "Nashua" he explores funk and gospel feels. Tunes like "The Genuine One" and "Eggshells" reveal the strong musical bond shared by Preminger and Palmer. Several tracks mine the emotional terrain music can explore, particularly "Acknowledgement" which employs harmonic touches, unison lines, and a slow, powerful buildup.

Noah Preminger
A native of Canton, Connecticut, Noah Preminger released his debut album, Dry Bridge Road, shortly after graduating from the New England Conservatory. He has since recorded more than ten critically acclaimed albums as a bandleader and is steadily listed among the top tenor saxophonists by critics and readers on the annual DownBeat Poll. Two new recordings were released in 2016, including an all-ballads date on the French vinyl label, Newvelle Records, and a recording inspired by Delta Mississippi Blues musicians, Dark Was The Night, Cold Was The Ground. On Inauguration Day, 2017, Preminger released Meditations On Freedom, a musical protest against ominous political developments in America. Preminger has also been featured in bands led by Fred Hersch and Cecil McBee, and recorded four albums for Brooklyn Jazz Underground as a member of the Rob Garcia 4.