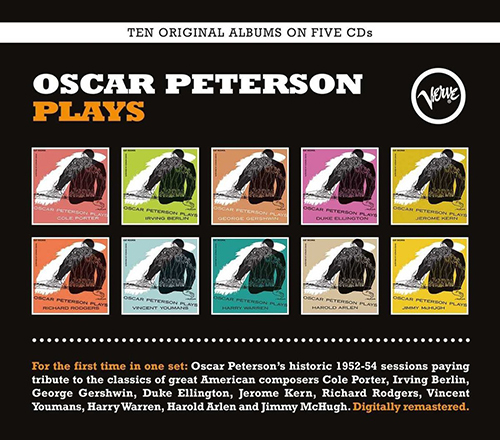 Producer Norman Granz, who discovered Oscar Peterson playing in Montreal in 1949, loved the pianist's playing so much that he presented Peterson with Jazz At The Philharmonic, became his manager, and recorded him prolifically during the 1950s for his labels (which included Verve) and in the 1970s and '80s for Pablo. Peterson was simply one of the greatest jazz pianists of all time. Even if he was criticized by some for the countless number of notes that he played and his endless assortment of recordings (it is fair to say that he was never under recorded), it would be very difficult to seriously dispute his musicianship, his consistent excellence, and the fact that he could outswing virtually anyone.

One of the most extensive projects undertaken by Peterson and Granz was the pianist's recording during 1952-54 of ten sets that featured some of the finest compositions of ten different composers. These "songbooks" found Peterson, bassist Ray Brown and either Barney Kessel or (during 1953-54) Herb Ellis on guitar; drummer Alvin Stoller is on part of the Cole Porter set. The 113 selections feature Peterson playing the songs of Porter, Duke Ellington, Irving Berlin, George Gershwin, Jerome Kern, Richard Rodgers, Vincent Youmans, Harold Arlen, Harry Warren and Jimmy McHugh. This project predates Granz's large recording of Art Tatum performing solo versions of the Great American Songbook, and his very successful Ella Fitzgerald Songbooks.

All of Peterson's songbook recordings are now available on a well-conceived five-CD set, Oscar Peterson Plays, put out by the Verve label (www.universalmusic.com). Since most of the performances clock in between 3-4 minutes apiece and this series was designed to alert a larger audience about both the pianist and the richness of the classic songs, Peterson and his trio usually stick near the melodies. However they cannot help swinging up a storm and the pianist is typically brilliant (if concise) throughout, leaving room for occasional guitar solos.

The project was so successful that during 1959, Granz and Peterson (who by then had a trio with Brown and drummer Ed Thigpen) did it again with nine more songbook albums, recorded in an 11 day period! Hopefully Verve will reissue all of that music in a similar box someday.

Most of the early songbooks have been difficult to find for years, so it is very gratifying to have all of this music in one box. Oscar Peterson fans will definitely want this highly recommended set.