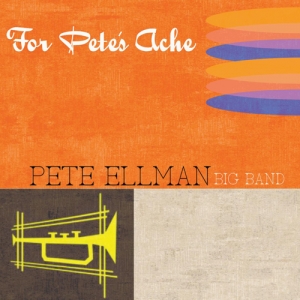 The Pete Ellman Big Band was formed in 2009 after Pete retired from the 566th Air Force Band. Since then, the band has played regularly in and around Chicago. They regularly invite student jazz ensembles to join them and will provide members of the band as guest clinicians, giving these budding musicians a gig-like environment playing the music they love. The band has had many jazz greats join them including Wayne Bergeron, Jeff Coffin, Wycliffe Gordon, John Fedchock, Peter Erskine, Louis Dowdeswell, Grace Kelly, Vincent Gardner, Alexa Tarantino, Eric Marienthal, Andy Martin, Mark Colby, Bobby Shew, Dan Fornero, Eric Miyashiro, and many more…

Additionally, the Pete Ellman Big Band has hosted numerous fundraisers at their events to help raise money for local non-profits such as Loaves & Fishes, Toys for Tots, Kids Matter, Kidz Cabaret, Youth Symphony of DuPage, Naperville Educational Foundation, Gil Ellman Memorial Fund, and more! To Pete, it is all about giving back to the community to help kids, in general, and also to give kids an opportunity to participate in the arts. In 2015 Pete started the Naperville Big Band Jazz Festival.
Pete has performed with nationally known artists such as Wayne Newton, Lynyrd Skynyrd, Aretha Franklin, Bob Newhart, Clark Terry, Louis Bellson, Kurt Elling, Steve Allen, and many more. Being a trumpet player, Pete’s favorite artists to date have been world renowned trumpeters Wayne Bergeron and Clark Terry.

“For Pete’s Ache” has been a labor of love for Pete. He is very excited to share this with jazz enthusiasts the world over. The album features numerous original compositions and a few new arrangements of wonderful jazz standards. Check out “High Speed Pursuit,” a detective type noir song with high energy and suspense adapted from a marching band field show by Dan Moore. The title song “For Pete’s Ache” is a theme song style chart that allows the band to vamp for intros ala “Johnny’s Theme” for The Tonight Show. “Livin’ Larger than Life” written by Alan Baylock (former arranger for the Airmen of Note) features a 12/8 Afro Cuban groove. For Ellington lovers, check out “It Don’t Mean a Thing if It Ain’t Got That Swing,” a Latin arrangement of the standard featuring Rich Clark on vocals and Roger Ingram screaming double C’s on the end. “For Pete’s Ache” has something for everyone, from ballads to barn burners. Enjoy the big band sounds of the Pete Ellman Big Band.