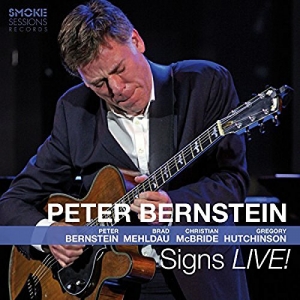 Back in 1994, guitarist Peter Bernstein recorded a CD, Signs Of Life, that found him leading an all-star quartet that also featured pianist Brad Mehldau, bassist Christian McBride and drummer Gregory Hutchinson. Over 20 years later, on Jan. 4, 2015, the quartet had a reunion for what Bernstein laughingly called their CD release party. The unit had never actually played together as a group in public before they were booked for a three-night engagement at Jazz At Lincoln Center. Signs Live, a recently released two-CD set, has all of the music from their two sets.

Comprised of 11 lengthy pieces (only two clock under 11 minutes), this extended package features the quartet performing nine originals by the guitarist plus three pieces (two played in a medley) by Thelonious Monk. A few of the songs were on the Signs Of Life set, some are later Bernstein compositions, and a few were brand new.

The music is essentially hard bop and straight ahead post bop. Bernstein takes singing solos on each selection (keeping the melody in mind while he improvises), Mehldau is a major asset both as a creative soloist and in support of Bernstein, and McBride also has plenty of solo space while Hutchinson is stimulating in support in addition to having his spots. Among the highlights are “Blues For Bulgaria” (based on a melody that Bernstein heard performed by the Bulgarian Woman’s Choir), the uptempo and Coltranish “Hidden Pockets,” “Jive Coffee” (which is “Tea For Two” in 5/4 time), the modal piece “Let Loose” and the heated minor-toned blues “All Too Real.” Monk’s “We See” inspires a particularly inventive Mehldau solo.

While no new innovations take place, Signs Live is a strong example of today’s modern mainstream jazz, music, looking back towards the 1960s while being performed by four of today’s top jazz artists. It is an excellent if way overdue recording by the Signs Of Life quartet.