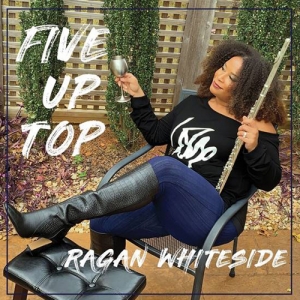 For the second consecutive year, soul-jazz flutist Ragan Whiteside is Billboard’s top female smooth jazz songs artist of the year. In the male-dominated genre in which only three females made it into the year-end top 10, Whiteside, powered by singles from her aptly titled new EP, “Five Up Top,” came in at No. 5 for 2020. Last year, the Atlanta-based musician-songwriter checked in at No. 3.

“I am incredibly thankful to be included. I hope it helps open doors for other female artists. I'm always grateful for any success, but this year even more so since the world was turned upside down. Everything was ten times harder, but we managed to pull through,” said Whiteside, who has a string of six consecutive Billboard top 10 singles. On Billboard’s year-end chart, Whiteside single, “JJ’s Strut,” paraded into the No. 35 position. The joyous number inspired by her daughter’s moxie peaked at No. 3 on the Billboard singles chart and went No. 1 on the MediaBase chart. Whiteside is the only female to appear in Billboard’s year-end top 10 songs, which she did in a guest starring role on emerging trumpeter Willie Bradley’s “It’s On Now,” the No. 3 song for 2020. Bradley is featured on Whiteside’s “JJ’s Strut.” “Willie is a cool dude and I enjoyed working with him and producer-songwriter Jeff Canady on ‘It's On Now.’ Willie has been grinding for a long time and I'm happy he has been able to breakthrough this year,” said Whiteside. Whiteside’s consistent success is all the more impressive in that she is the lone flute player on Billboard’s Smooth Jazz Songs Artists chart and the only flutist with a single to make the top 40 on the Billboard Smooth Jazz Songs chart.

The conservatory-trained Whiteside said, “There was a time when the flute wasn't heard at all in smooth jazz, so it's exciting to see a shift in the landscape that allows flautists to flourish.” Whiteside cowrote four new songs for her fifth collection, “Five Up Top,” collaborating with her producers, influential soul-jazz keyboardist Bob Baldwin and Dennis Johnson (Celine Dion, Freddie Jackson, Melba Moore). Other singles from the EP to make the Billboard top 10 are the backyard barbecue-flavored joint “Jam It,” which went to No. 2 and reigned in the No. 1 position at MediaBase for five weeks, and a soulful contemporary jazz-R&B take on the Little River Band pop-rock hit, “Reminiscing,” which climbed to No. 8.  Although Whiteside entered the year with the goal of releasing a full-length album, the coronavirus had the final say and the flautist settled for dropping the five-song EP last month. Whiteside finds hope and is energized by the connection between the EP title, “Five Up Top,” and being Billboard’s No. 5 artist for 2020.“I've heard that the number five signifies freedom and creativity. Hopefully, this is a sign of huge musical growth in the coming year!”