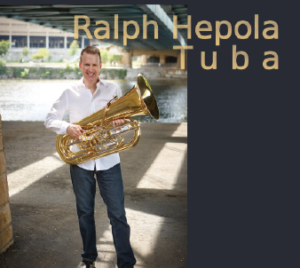 Born in Saint Paul, Minnesota in the United States, Ralph Hepola studied piano before starting on the tuba at age twelve. At seventeen, he was chosen to play before the British Royal Family in the Manitoba All-Province Band at Brandon University in Manitoba, Canada. While still in high school, Ralph began performing as an extra musician with the Minnesota Orchestra, which later included recordings, and tours to Carnegie Hall and Lincoln Center in New York City. While still a teenager, Ralph won a position with The United States Army Band of Washington, D.C. At age twenty, he won a full scholarship to the Manhattan School of Music in the Young Artist Competition of the Minnesota Orchestra/WAMSO.

Ralph earned his music degree at Northwestern University where he studied with renowned musician and teacher Arnold Jacobs. Five books have been published covering Mr. Jacobs’ celebrated career, which included forty-four years as Principal Tubaist with the Chicago Symphony Orchestra. At Northwestern University, Ralph played and soloed with Jazz Ensemble I, which twice won Best Big Band at the Notre Dame Jazz Festival.

Ralph Hepola, tuba
Peter Shu, piano and all keyboards except as noted
Daniel Arlig, acoustic and electric basses
David Stanoch, drums and percussion
Mark Asche, keyboard on Hepmobile and piano on Blue Moment
Peter Lothringer, guitar on Ralph’s Riff and Through the Wringer