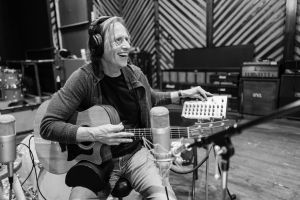 Stephen Bryant’s long awaited debut album “Folk Song” is here, and he and his musical colleagues have really aced it-- and by anybody’s judgement.  “Folk Song” is a rich, multi-dimensional “extended play record” released as RED 123.  This collection of tunes, written by guitarist/leader Steve Bryant, is a musical “tapestry” of feelings, emotions, expressions, desires, longings, understandings… all woven together by Bryant and some truly brilliant musicians and artists. Yes, this is indeed Steve Bryant’s premier record, but more accurately; it’s the culmination of many decades of excellent musical performances and years of service as an educator of music. He is new to the “national” scene as a jazz  recording artist, but he has certainly had a distinguished reputation in his home state of New Jersey for many years.

How do you become a virtuoso jazz guitarist? Well, you do it the way that Steve Bryant did it… by starting out playing the French Horn as a kid in grammar school! While I am partially joking here, the truth is that Bryant actually did begin his career as a French Hornist! This experience has served him well though, because through his formal musical education, he garnered the knowledge, training, and valuable experience he would later use in his career, and to create this fantastic EP—“Folk Song.”  Steve really began getting into the guitar in junior high when a cousin taught him some chords. It was rock and roll in high school, but Bryant also had a natural curiosity and penchant for jazz, so he began studying with legendary guitarist Vinnie Corrao. After high school, it was six years playing guitar for the Navy Band, followed by more rock performances, with jazz always remaining at the “fulcrum” of his musical life. Today Steve is the Band Director at Wall Intermediate School and the co-owner with his partner Jason (“J”) Stanley, of MMDA  (Manasquan Music Academy). All of this vast and illustrious experience has laid the perfect groundwork for this RED 123 new project.

Track number 1, “Folk Song” is dedicated to the primary caregiver of Stephen’s Dad. It has an extremely catchy melody with lots of surprises to keep us on our toes! The second verse has a slight “upbeat” feel, and what a marvelous chorus it has! After Bryant’s clean, crisp, and very hip guitar solo, the band comes back again with a slamming “upbeat” variation of that original infectious melody. This tune is aptly titled with its appealing folk/jazz flavor. You’ll definitely be humming the melody to this one!  “5 on C” is exactly what the title implies—5/4 time with an acoustic C6 tuning. You can feel the guitar “swells” in 5/4 with tremendous technique displayed by Bryant. There is an intelligent energy here… a constant moving force… until we come to another delightful surprise! It’s a deliberate “drop” in the meter and pulse! The whole group feeds off each other splendidly with the energy building back up into a truly astounding syncopated extended piano solo by Timothy Adedigba Ogunbiyi.  The musical “back-and-forths” here make it a real jewel. There is real musicianship on this one by Bryant’s supporting team! “Joni” is of course, Bryant’s affectionate “tone poem” to musical legend—Joni Mitchell. The superb orchestration and gentleness bring Ms. Mitchell’s social and philosophical ideals and enlightenment to life. “Joni” is as wistful and pure as one of Joni Mitchell’s own watercolor paintings!

“Cameron Court” is one of the most reflective of all the tracks in this collection. Steve Bryant moves this leisurely 3/4 “stroll” down Cameron Court in a nostalgic, haunting way. The band plays with such grace and restraint here. You get all 5 senses met and you get an “inner calm” from this wonderful, poignant piece. “Trane Time” is of course a tribute to John Coltrane’s masterpiece album “Giant Steps.”  So, is this an homage to an iconic jazz saxophonist by a GUITARIST leader?  …. yes! As I am suggesting, what makes this track especially precious is that Steve and the band were able to capture the quintessence of Mr. Coltrane’s genius without even having a saxophonist in the band!  The harmonic progression variations, lightning-fast guitar work with different guitar sounds toward the end, and astonishing, gliding piano solo make this a real standout. The final track “August Moon,” inspired by Steve’s daughter Sydney, takes the listener in many different directions with its unique choruses and bridges. Just as there are different phases of the moon in August, you get different musical “phases” here. There is a real looseness with the band. The definitive ending takes us into a delightful pre-autumn night saunter.

I guess that the greatest compliment one could give to this project is that it contains fabulous compositions all executed thoughtfully and musically. In addition to the tremendous collaborative efforts of Bryant’s stellar bandmates, it is noteworthy to point out that “Folk Song” was mixed by Grammy Award winning producer/mixer Dave O’Donnell who has lent his supreme skills to such artists as James Taylor, Eric Clapton, John Mayer, Sheryl Crow, and Ray Charles!  You will definitely want to get this EP. 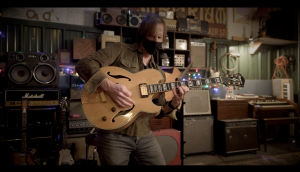 Now that you know a little bit about Stephen Bryant’s background, you see how you really have to be a “multi-dimensional” musician with “multi-dimensional” experience to be able to compose, conceive, and then bring to fruition this kind of an amazing project. Steve Bryant has spent his life learning, exploring, and observing. This album is the product of Steve Bryant’s innate sense of perception combined with his sensitive, uninhibited gift for expression. We are so grateful for his gift. We think that you will be too.

ALL SONGS WRITTEN BY STEVE BRYANT

Mastered by Drew Lavyne at All Digital