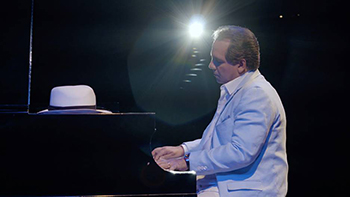 “Somewhere In The Hills” blends music, voice and dance in the latest clip culled from the “Sebastiana” album.

FORTALEZA, BRAZIL (14 May 2018): For Brazilians, Antonio Carlos Jobim’s catalogue is as iconic, influential and impactful as George Gershwin’s contributions to the Great American Songbook, making the inclusion of a classic from the legend’s repertoire a must for pianist Ricardo Bacelar’s “Sebastiana,” the newly-released album heralding the works of Brazilian composers along with celebrating the Latin music diaspora. Bacelar selected “Somewhere In The Hills” and, in keeping with the multicultural nature of the project, invited Venezuelan torch singer Elena Rose to croon the wistful lyrics of moonlit romance. For the accompanying cross-cultural video that was just released (see below), dancer Isabelle Dubois adds fire with her impassioned movement and balletic choreography.

The video was lensed in Brazil and Miami, the latter being where “Sebastiana” was recorded and where Rose is based. Bringing a retro 1950s feel to her interpretation of the song sung most notably by Ella Fitzgerald, Rose’s sultry voice intertwines with Bacelar’s elegant piano embellishments. Adorned in a tribal mask of Brazilian Carnaval makeup, Dubois gyrates, twirls and pirouettes with a gossamer silk, splashing through water and amidst crashing waves on the Brazilian shoreline and in front of a sparsely-constructed hangar.

“Sebastiana” producer Cesar Lemos (Ricky Martin, Paulina Rubio) helmed Bacelar’s modern, loungy arrangement of “Somewhere In The Hills.” The critically-hailed album hit JazzWeek’s Top 50 albums chart and is garnering airplay from multiple jazz radio formats. Throughout the mostly instrumental, meticulously crafted 15-cut disc, Bacelar’s piano, keyboards and Moog synthesizer issue fervid gale force solos or drape lavish backdrops when his spotlight vocalists and musicians occupy centerstage. Taking full advantage of the melting pot that Miami is for Latin music, Bacelar was joined in the studio by musicians from Cuba, Argentina, Venezuela, Colombia, Peru and the US. He encouraged them to imbue their own cultural heritage to the music mix, adding traditional instruments, authentic rhythms and distinctive melodic inflections to the contemporary jazz and fusion tracks.

“Somewhere In The Hills” is the fifth video spawned from “Sebastiana.” Up next is a clip for “Partido Alto,” which Bacelar says “will be shot in a favela (a Brazilian slum) to show the social and economic abyss in Brazil.”

Bacelar, who recently concluded a successful four-date concert run through Lisbon, Portugal, plays the Blue Note in Rio on May 31. For more information, please visit http://ricardobacelar.com.br.