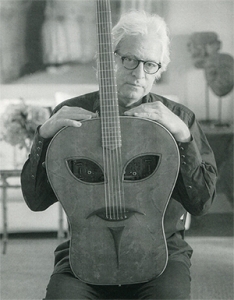 Richard Leo Johnson is a true pioneer in acoustic guitar.
A passionate and spontaneous player, he is often compared to such masters as Bruce Cockburn, John Fahey, Michael Hedges, Burt Jansch, Adrian Legg, Leo Kottke, Steve Tibbetts, and Ralph Towner. But Johnson’s style, characterized by complexity, exciting energy, and compellingly unfamiliar harmonies marks this player apart from the others.

Johnson was raised in America’s deep South, in a small Arkansas town in the Mississippi Delta. He began playing guitar at age 9, briefly taking lessons from a hard-drinking oil field worker before deciding he’d learn more on his own.

Practicing on his own, he developed an individual playing style alternating between 6, 12, and 18 strings, using all parts of the guitar, and employing 30 tunings he devised.

JazzMonthly: Tell us about your new release "Celeste." What does the title refer to and as a whole what is the concept of the album?

RLJ: The title was arrived at by virtue of a search for astrophysics terminology.
The character I created for the CD, "Celeste", is a female...so the abbreviation of celestial, a term from the astrophysics vernacular, seemed very appropriate.

The concept is based on a series of fictional characters. The Catalyst for the series was "The Legend of Vernon McAlister.The prior release to "Celeste" was "Who Knew Charlie Shoe"...that CD was a collaboration with the inimitable percussionist/drummer/composer, Greg Bendian.

Several years later, a mysterious and beautiful young lady "Celeste", was showing up at random places, playing an unusual guitar and singing with a voice that was other-worldly.
Anyone that heard her was immediately moved and amazed...it seemed as if she had 3, sometimes 4, separate voices.
Astoundingly, the songs had no determinable words, but everyone listening seemed to know what exactly she was saying.

JazzMonthly: We read about the one-of-a-kind instrument used on this project. How did this come about?

RLJ: Based on a complete fluke...one of our dear friends, Jane Tucker, came with her new beau, Dan Morris, to visit and hang out in Savannah. Dan told me about a friend of his, Michael Brolly...an amazing artist/wood sculptor, from Pennsylvania.
Turns out Michael was commissioned by C.F. Martin guitars to create a special instrument....the idea was to build an acoustic guitar with a theremin built into it.....
I simply mentioned that I would love to get my hands on that thing....!
Thanks to Dan and Michael, Martin shipped me the "alien" and allowed me to do a recording using this amazing one-of-a-kind instrument....

JazzMonthly: How would you describe what inspires you to do what you do? 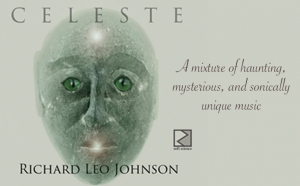 RLJ: I started playing guitar at 9. I never learned to read or write standard music notation.
Over the course of several years I started toying around with the tuning knobs.
The different sounds and harmonies were very inspirational. The true moment of inspiration/confusion occurred when I was around 15. A friend gave me an unmarked cassette tape....he said I would really like it. He neglected to tell me it was two different guitarist on either side of the tape. Well as it turned out side 1 was Leo Kottke and side 2 was Johns McLaughlin...my brain fused the two dramatically different players styles and approaches into one person....
Since then I have been using the guitar as a tool to express my ideas and feelings without the constraints of conventional trappings.

JazzMonthly: How would you characterize your sound?

RLJ: Each recording I have done is somewhat different. I use almost 30 different tunings...that alone conditions my sound in a way standard guitar tunings cannot. The earlier recordings with Blue Note and the first one with Cuneiform were really about virtuosity and extended technique....the recordings that came after those, starting with Vernon McAlister, are really more about tone, mood, and allegory.

JazzMonthly: Each song has a certain melodic openness to it. How much did spontaneous improvisation play a part... how much was created with a preconceived structure?

RLJ: I always write and record with a certain intangible and spontaneous response to the tuning I am using and the sound that comes from the instrument....I never start out with an idea or meaning but let the process of invention determine the outcome. All of the songs I play are pretty much committed to memory. I record the basic tune and then revisit the music and add to the basic idea. This especially applies to "Celeste". The theremin is an incredibly esoteric and bizarre instrument. I totally abused it on this recording, but...I guess that is how I have always approached the guitar.

RLJ: Compositionally my favorite song is "Swoon"....it is more symphonic than most of my stuff...and I had a blast putting that together. A far as accessibility and fun...I think that would be "Show Me the Way to the Next Whiskey Star".

JazzMonthly: At what point did you make the decision to become a professional
musician and actually record your own CD?

RLJ: I started recording in my late 20s and did a couple of self-released cassettes.... did some random shows at clubs and colleges. I got an endorsement with a major acoustic guitar manufacturer(not Martin) and that kept me very busy doing clinics. Soon after that I was signed to Blue Note (did 2 CDs with them "Fingertip Ship" and "Language". Some years later I started working with Cuneiform and did 3 CDs with them. This is my 1st self-release since my last CD with Cuneiform.

JazzMonthly: Who were your greatest influences?

JazzMonthly: "Celeste," is a mix of haunting, mysterious and soul-stirring performances. Do you remember a particular moment when you just knew that music was your future, and that you were compelled to fulfill that destiny for yourself?

RLJ: That is a very kind assessment of "Celeste". I have been obsessed with the guitar for most of my life...I don't see any reason to not play and record music as long as I am able.