Set to release his debut single, a beautifully intimate re-imagining
of The Four Seasons’ #1 classic 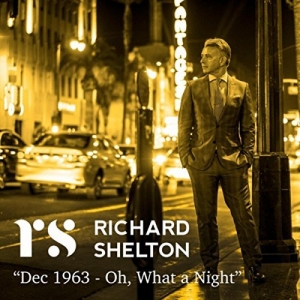 Throughout his extraordinary, multi-faceted career, Richard Shelton has acted on stage, in films and television, performed for British Royalty and Elton John, lit up London's West End with his stirring, critically acclaimed portrayal of Frank Sinatra in "Rat Pack Confidential" and earned raves for his tour-de-force show "Sinatra & Me" everywhere from the UK and Middle East to California.

Produced by Sean Hargreaves – who has worked with, among others, Michael Buble, Natalie Imbruglia, Alison Moyet and Us3 - the track's elegant ballad arrangement as a vocal duet with Sinatra's longtime pianist Mike Lang reveals the deeper joys and heartfelt romance of the lyrics. It was recorded at Capitol Studios in Hollywood, in Sinatra's lounge in studio B, using Ol' Blue Eyes' microphone.

"My idea to arrange 'Dec '63 (Oh, What A Night)' like that was inspired by Frank and Nelson Riddles' work on 'One For My Baby,'" Shelton says. "I wanted to make it as simple as possible so that when people hear it, though they are familiar with the original version, they will say, 'Oh, that's what the song is about.' It is a tune that literally stops people in their tracks because they all know it, yet this minimalist version forces them to stop and listen. For those who are not familiar with my story and career, it's a great introduction to what I sound like without any effects. We often live in such a hyped up world that offering the simplest things can help everyone gain perspective."

"Dec '63 (Oh, What a Night)" is the lead single to Shelton's soon to be released self-titled debut album, which will feature Lang, two other former famed Sinatra musicians (double bassist Chuck Berghofer, drummer Gregg Field) and a full, swinging band recorded at Capitol. The album will feature a set list blending dynamic originals, contemporary pop classics ("It's Not Unusual," "And I Love Her") and standards ranging from "Where or When" and "My Kind of Girl" to "Pure Imagination" and "On a Clear Day You Can See Forever."

Two of the originals are deeply autobiographical. "Sinatra and Me" is a spirited reflection on Shelton's lifelong affinity for, physical similarities to, performances as and interpretations of  Frank's music, while "An Englishman in Love in LA" is a whimsical chronicle of the longtime Brit's decision to relocate five years ago. His success in Los Angeles was far from a sure bet, but he has thrived both personally and professionally living in Southern California. "Life is nothing but a journey," he says, "and on that journey, you take twists and turns, you fall and tumble and you pick yourself up and find unexpected beauty. You can't have a map in life because life is about the unexpected. One of my favorite sayings is 'Man cannot discover new oceans unless he first has courage to lose sight of the shore.'

"After several years of settling in, I now feel at home in America,"

"After several years of settling in, I now feel at home in America," he says. "I feel I belong and the songs on the album express that. I pay homage to the part of my life that was about playing Frank, and I cherish it, but I now see that as a different aspect of my career. I had reached a point in my career in Britain where I was a regular face in movies and on TV and had accomplished everything I had hoped to. I wanted to keep growing and always had a dream to come to the U.S. and experience a fresh new life. The song 'An Englishman in Love in LA' sums that up beautifully. It's about somebody who wants to walk in the sunshine and feel that hope, choose to live that dream even when there's no guarantee about what tomorrow holds."

In the U.S., Shelton is best known for his role as Mr. Benson on Showtime's "House of Lies," with Don Cheadle and Kristen Bell and portraying Arnaud in "Jane the Virgin" on the CW. In the U.K., he played the charmingly murderous series regular Dr. Adam Forsythe in the long running British drama "Emmerdale.' He has also appeared in the films "My Week With Marilyn," the Japanese cult hit "Joker Game," BBC Films' "I Capture the Castle" and the L.A. based "Stuck." As a founder of The Bridewell Theatre in London, he has performed in Shakespeare's "Much Ado about Nothing" and "Julius Caesar"; he also starred on the West End stage as Jumping Jack Flash in the rock musical "Carnaby Street" and internationally as Harry Bright in "Mamma Mia!" Shelton recently traveled to Argentina Buenos Aires to shoot the upcoming film "Palau," in which he plays a WWII Army major who turns his life over to God.

Shelton's performance as Sinatra in the London stage production of "Rat Pack Confidential" earned him a Best Actor in a Leading Role nomination from the Manchester Evening News Awards. He later re-created that role for an international tour of a show titled "Sinatra – The Main Event." In August 2016, Shelton produced and starred in the critically acclaimed "Sinatra and Me" at the Edinburgh Fringe Festival. Interwoven with song, the show examines the 20 incredible synchronicities between him and Sinatra. In addition, he has performed at The Coliseum and the world renowned Ronnie Scott's in London, and sung with the Royal Philharmonic Orchestra, the BBC Big Band and the BBC Concert Orchestra. He currently hosts a monthly jazz night at the exclusive members club Soho House in Los Angeles.