Roy and Mulgrew – Hargrove and Miller, that is.

For many years in the Jazz world, the standard form of duo was usually some combination of piano or guitar or even violin playing with an acoustic bass.

Guitar and violin combinations occasionally surfaced but the focal point of most duos was usually a piano or a guitar due to their ability to work as both a solo and accompanying instrument with the bass providing a quiet, rhythmic propulsion and the occasional solo.

Since guitar and piano can play both chords and rhythm there is a tendency for these instruments to clash unless there’s a fine line that acknowledges that one instrument plays rhythm when the other is soloing and vice versa, but such “rules” are often broken when the music gets heated. The acoustic bass is safer. It only has four strings with which to produce sound and even with amplification, it’s quieter and less likely to clash with a piano or guitar.

But in recent years, the standard instrumentation for duos has changed - dramatically - and we now find just about any combination of instruments pairing up.

Whatever the instrumentation duos are tricky. There’s always the temptation to fill in the additional space left by the use of only two instruments through overplaying or overblowing.

Duos are also challenging as everyone approaches making Jazz differently and some styles are more compatible than others.

The key lies in not just listening to what you are playing but in paying close attention to what the other instrument - whatever it may be -  is playing and leaving room for it to express itself.

This approach goes well beyond “call and response” and collective improvisation [both instruments playing at the same time essentially disregarding or playing through the other instrument].

Which brings me to Roy Hargrove and Mulgrew Miller, or, if you will, trumpet and flugelhorn and piano; two instruments not usually found in a duo.

Unusual though the pairing may be, it works because Roy and Mulgrew observe the caveats noted above and go out of their way to be inclusive of one another in every facet of their playing together.

It also works because they play well together; their styles fit. You can tell that they are having a great time and that joy helps create some interesting and intriguing Jazz for the listener.

These recordings underscore the adaptability of the piano as both a solo and an orchestral instrument and Mulgrew is a master at shifting from one role to the other.

Roy’s sparkling tone on trumpet and mellow sound on flugelhorn resonate with the listener as only brilliant brass instruments can, but they are enhanced by Mulgrew’s sensitive pianist shading and nuances. At times, you can hear Miller suggesting substitutions in chord sequences to Roy while Roy sometimes returns the favor with key modulations and alterations in the way the melodies are phrased.

The listener is treated to thirteen selections, each averaging anywhere from 6:00 to 9:00 minutes, and all are based on songs and tunes from the Great American Songbook or the Jazz Standards with the exception of only original by Roy.

This melodic familiarity makes it easier for the listener to sit back and enjoy the creative efforts of both artists without having to contend with recognizing too many new or unusual themes.

It’s common to describe the lineage of musicians, but the usual “comes from” is less important ultimately than meeting the musician of his or her own terms. Of course, you can hear elements of the Jazz tradition in both of their styles, but what’s more important is to listen to Roy and Mulgrew “tell their own stories.” And tell them they do, beautifully.

And when it comes to music made in a concert setting, there’s the extra added benefit of the shifting of energy between the players and the audience and this quality is certainly present on these recordings.

Ann Braithwaite, who is handling the media release Resonance Records, did her usual fine job in providing the following background for how this music came to be recorded, as well as, developing an excellent overview of the background of each musician in the following excerpts from the press kit. 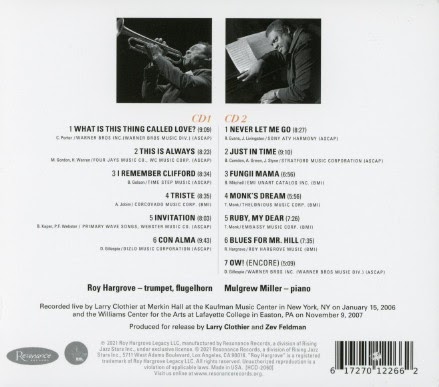 “Previously unreleased live recordings from 2006 and 2007, available July 17th as a limited-edition 180-gram 2-LP Record Store Day exclusive and July 23rd as a deluxe 2-CD and digital edition issued in coordination with the Hargrove and Miller Estates

Co-produced by Zev Feldman and Larry Clothier with executive producer, George Klabin, In Harmony is the first posthumous Hargrove release since the trumpeter’s untimely passing on November 2, 2018 at age 49. Aida Brandes-Hargrove, President of Roy Hargrove Legacy, said: “Roy’s daughter Kamala and I are excited to collaborate with Resonance and to get this great new album out to Roy’s many fans.”

Miller passed away on May 29, 2013 at age 57. With In Harmony, we are back in the musical company of these two greats for a short but precious time. And though the settings heard here were ticketed concerts, the vibe unfolds exactly as it might have back in the day at Bradley’s, when Hargrove was first coming up in the late ’80s and Miller loomed large from his associations with Art Blakey, Tony Williams and others. Acclaimed jazz journalist Ted Panken, in his extensive booklet essay for In Harmony, evokes that scene, and its central importance to Hargrove’s development, in vivid detail.

Hargrove told Panken, “Bradley’s was like going to school. It was like your masters. You go in there, and you’re playing, and there’s Freddie Hubbard at the bar! What do you do? Everything I’m playing right now I owe to that whole scene.”

Hargrove hailed from Texas, Miller from Mississippi. Each of them drank deep from the Black music traditions of their respective regions, absorbing lessons from family, the church, and blues and soul artists long before they became immersed in the language of their jazz forebears. In Harmony finds the two alluding to those great jazz legacies in many ways, from song choices to improvisational flourishes to off-the-cuff yet impeccably placed arranging details.

We hear Hargrove calling out to Clifford Brown, Dizzy Gillespie, Blue Mitchell, and more. Yet he plays from the perspective of a prescient bandleader who burst through genre boundaries collaborating with leading lights of hip-hop, neo-soul and Afro-Cuban music, laying the groundwork for such next-generation trumpeters as Keyon Harrold and Theo Croker (both of whom are quoted in the booklet as well).

Miller, as Panken observes, had his own “fluid personal argot,” even as he drew on influences from Bill Evans, McCoy Tyner, Herbie Hancock, Chick Corea and Keith Jarrett to Woody Shaw. “His concept drew on piano-as-orchestra signposts like Art Tatum, Oscar Peterson, Ahmad Jamal and Erroll Garner, the ‘blowing piano’ of Bud Powell, the disjunctive syncopations and voicings of Thelonious Monk, and the melodic ingenuity of gurus like Hank Jones, Tommy Flanagan and Cedar Walton,” Panken adds.

It’s all there, in the bright tempos of “What Is This Thing Called Love” and “Invitation,” the majestic balladry of “I Remember Clifford” and “Never Let Me Go,” or the funk of “Fungi Mama,” where one can practically hear Al Foster’s signature drum groove from the Blue Mitchell original. Which brings us to another key Panken observation: In Harmony is the only recording in Hargrove’s entire discography not to feature a drummer. Miller, for his part, has one solo album and a scant few duos in his catalog, making In Harmony an even more significant addition to the historical record.

“From the very first time I heard these recordings, I was immediately taken by the sheer virtuosity of these two masters’ ability to mesh with each other,” says Resonance Records Co-President and Co-Producer of In Harmony Zev Feldman. “They’re playing their hearts out. I personally find these to be some of the most daring and beautiful interpretations of classic jazz repertoire I’ve heard. It’s an honor for Resonance to be able to collaborate with the families of Roy Hargrove and Mulgrew Miller to bring this music to their many fans, and we thank them for the opportunity.”” 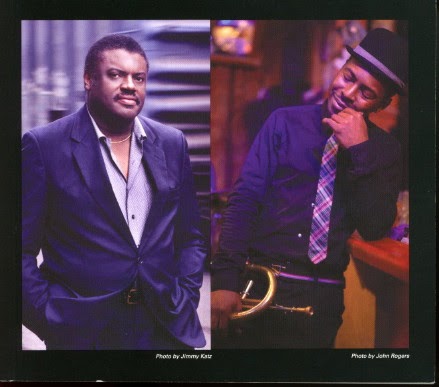