SAMI STEVENS AND THE MAN I LOVE – And I’m Right 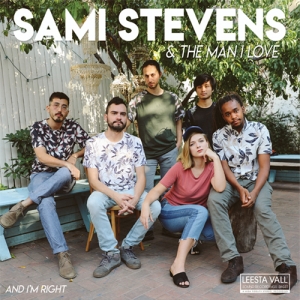 SAMI STEVENS AND THE MAN I LOVE

Sami Stevens and the Man I Love offer smart songwriting and tight execution in And I'm Right, the first release of the female-led, Brooklyn-based group. Better known as front-woman to faux-soundtrack group Tredici Bacci (write-ups in Rolling Stone, Pitchfork), Stevens' breakout full-length release marks a new chapter for the young singer. Sami Stevens and the Man I Love weave seamlessly through RnB, Soul and Jazz, the sound held together by Stevens' unique writing style and execution. Stevens is a "savvy vocalist who brings an improvisation-laced sensibility to R&B and infuses jazz with soul" -Berkeleyside, and her style garners comparisons to acts like Amy Winehouse, Stevie Wonder, Hiatus Kaiyote, and Emily King.

An excerpt from Stevens' liner notes shines light on the intention behind the album. "And I'm Right is a record written as therapy. Life is at once the most meaningful miracle in the universe, and the act of up early every morning to go to a job you only sometimes like. There are no answers, and yet somehow, it's your most profound responsibility to seek out truth and happiness for yourself and others. I hope this record helps."

And I'm Right is being released by Leesta Vall Records on 12" clear vinyl. The group just celebrated the release with a show at Bowery Electric in NYC on December 13th, featuring Progger collaborator Melissa McMillan, and Action Bronson producer Dominic Missana.

For more information on the release, or to set up an interview, contact Stevens' team at samistevensvoice@gmail.com