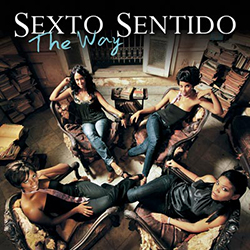 "The Way" is SEXTO SENTIDO'S most recent CD. For the first time the girls relied only on their own creative skills and included their very own compositions and arrangements... kept like a treasure for years in their private song collection.

The CD was recorded in the leading studio of Havana (ABDALA) and mastered in the South of France at the renowned RECALL Studio. "The Way" shows the wide spectrum of their music from contemporary Jazz to Bossa Nova, from smooth R & B to the traditional tunes of their home country Cuba, represented by the song and video "Guajiro", which became a countrywide No. 1 hit on the island in 2011. Not to forget their beautiful black and white video "Angry Boy".

The CD "The Way" was launched under the girls own Label (Sexto Records) by ZEBRALUTION Germany (a company of the WARNER Music Group).

Sexto Sentido was founded in the year 1997 in Havana, Cuba, by the 4 singers Arlety Valdes, Eliene Castillo, Melvis Estevez and Yudelkis Lafuente. Just  after a few months of performing in the local music scene their name and reputation became a staple in the Cuban music culture. After their first awards at renowned Havana Music Festivals (e.g. JO-JAZZ 2001, CUBADISCO 2007) Sexto Sentido became the leading entity of vocal harmony in Cuba. In 2004 they made their first CD ¨Bossa Cubana¨ (Elephant Records), a collection of classic Brazilian songs with Cuban elements. Since that release, they are known in whole Cuba with outstanding reviews.

SEXTO SENTIDO frequently collaborates with worldwide renowned artists of the Cuban and Latin-American music scene, such as Chucho Valdez, who described them as "the creators of the most important vocal work in Cuba in the past 3 decades", Pablo Milanes, Silvio Rodriguez and also with members  of the legendary Buena Vista Social Club (e.g. Omara Portuondo, Amadito Valdes).