The Buzz on Justin

“This kid is something special.” – QUINCY JONES

“Justin is an older man in a little boys body!! It’s so great to see somebody so young have such a vast love of ALL kinds of music!! And to see his work ethic and his drive is so inspiring! He sounds amazing and he's only getting better!” – ROBERT GLASPER

“When I first saw him play I said to myself ‘This kid is something special. He really is!”
– HARRY CONNICK JR.

Born in Johannesburg, South Africa and based in Durham, NC, musical wonder-kid Justin Lee Schultz is the good news you did not even know you needed. He is joy personified. The multi-instrumental wizard who has dazzled audiences on TV shows Harry, Little Big Shots and American’s Most Musical Family, is a prodigy in the fashion of his idols Stevie Wonder and Herbie Hancock. His talent is exceptional not merely because he is young but also due to his melodic, harmonic and technical maturation. While his peers are learning the latest Tik Tok dances and amassing kills on Fortnite, Justin prefers studio time and woodshedding for hours. While social distancing has most people jamming at home with their families, Justin has literally been jamming with his musician father and bassist Julius and 16-year-old sister and drummer Jamie-Leigh. “Music brings me joy because I can express myself when I play. I can also get creative when I’m improvising,” shares the amiable, cherub faced and charismatic 13-year old who has aspirations to one day share the stage with Wonder and Herbie Hancock, as well as Bruno Mars, Charlie Puth, Jacob Collier, Cory Henry and Robert Glasper. Justin, who plays piano, guitar, bass guitar and talkbox, devotes five to seven hours each day to his musical craft. His anticipated Shanachie Entertainment debut will be released November 2020. 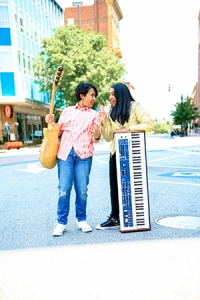 Shanachie VP of Jazz A&R Danny Weiss, who was instrumental in producing another young prodigy, the pioneering jazz-fusion guitarist Larry Coryell states, “The words prodigy and genius do not do him justice. The warmth, the maturity, the feel, the brilliance... these are qualities that only a handful of artists can hope to attain, regardless of their age.” Justin Lee Schultz’s anticipated label debut will unite him with some of the biggest names in contemporary jazz including Bob James, Harvey Mason, Najee, Gerald Albright, Jonathan Butler and Pieces of A Dream, among others. Justin also welcomes his friend and fellow prodigy, youthful Brazilian bassist Michael Pipoquinha on a track, and his sister, drummer Jamie is featured on four tracks. While Justin and his father share the producer hat for much of the recording, they did enlist help from such heavyweights as Jeff Lorber, Paul Brown and Kim Waters, who lend their Midas touch and perfectly showcase Justin’s dazzling talents.

Within 30 seconds of experiencing Justin in his musical element, it is apparent that he was born with a gift. His father Julius shares, “When Justin was five I called him and Jamie up on stage together to play at one of my concerts. It was then that I knew I had something special. It wasn’t my intention for my kids to play music, but when they showed interest and started playing and showing incredible potential, I knew I had something special on my hands. Every time I hear them play, I’m super proud.” Justin cites his dad as his main inspiration. “God blessed me with my musical gift but my dad guided me and nurtured it!” he says.

With a new CD on the way, Justin Lee Schultz has high hopes. “The ultimate dream is to win or even get nominated for a Grammy!" exclaims Justin. “I also hope that I can give people feel joy and happiness when they listen to my music!”