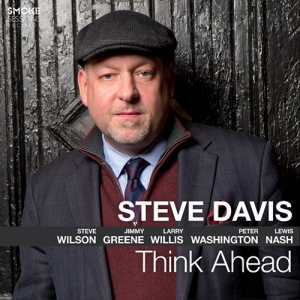 In life as in jazz, you never know what's coming around the next corner -- so it's always best to think ahead. Trombonist/composer Steve Davis not only offers those two words as a sound piece of advice on his new album, Think Ahead, but exemplifies the art of putting it into action. Out now on Smoke Sessions Records, Think Ahead offers a master class in reacting to the unpredictable from an elite group of jazz all-stars whose ability to create spontaneously borders on the clairvoyant.
In part, that's simply due to the fact that Davis has assembled a stellar group of masters: the trombonist is joined by saxophonists Steve Wilson and Jimmy Greene, pianist Larry Willis, bassist Peter Washington and drummer Lewis Nash, each deserving the title of "jazz giant" in their own right. But add the fact that the bandleader shares with every member of the ensemble a long and deep history, and you have the makings of a truly profound, flawlessly swinging, flat-out burning set of music. "I've been deeply involved with everyone in this band on not only a professional level but as friends for decades," Davis says. "So it was more than an honor to have this group together."
While the focus of Think Ahead is on Davis' memorable original compositions, Tony Williams' "Warrior" proves the ideal choice to reveal the fiery intensity that this sextet and its powerhouse frontline can achieve at the outset. Nash's propulsive rhythm ignites short, bold statements from all three horns and Willis before the drummer takes his own explosive turn. The other side of the spectrum is represented later by the familiar standard "Polka Dots and Moonbeams," which leads off with a tender solo intro from Willis before Davis expresses the melody with an airy delicacy that few can coax from the trombone. "Love Walked In" is a bouncy, joyful stroll through the Gershwin favorite, while "Little B's Poem" is a poignant send-off for the late vibraphonist Bobby Hutcherson, another idol with whom Davis got to play twice: once with McLean, and later with Corea.

If the line that Davis trades with Wilson's soprano on "Abena's Gaze" suggests a look both warm and incisive, that's exactly the impression that the composer would like to give of his fiancée, singer and educator Abena Koomson. A teacher of ethics at the Ethical Culture Fieldston School in the Bronx, Koomson also played the title character's mother in the Off-Broadway production of the musical Fela! "And yes," Davis adds, "she possesses quite an intense, wonderful gaze."

The soulful "A Little Understanding," is Davis' funky plea for just that, at a time when a lack thereof seems to dominate the headlines. (The current political climate, he jokes, is another reason to "think ahead" - to, say, four years and an election cycle in the future.) "Mountaintop" takes its title from a more inspirational leader in that regard, Dr. Martin Luther King Jr. - in part because the steely chords that open the minor blues evoke Dr. King's aspirational message, but also due to the fact that the recording date happened to land on the January holiday in his honor (the rare date when all of these in-demand artists could coordinate their schedules).

The soaring "Atmosphere" harkens back to Davis' and Wilson's tenure with Chick Corea; the chord changes were borrowed from the pianist's "500 Miles High," which the two had occasion to revisit with him recently as part of Corea's landmark two-month 75th birthday celebration at the Blue Note in New York City. Davis' version becomes a vehicle for Willis' eloquent playing and Wilson's agile, lyrical flute. The title track is an exercise in thinking ahead, with rapid-fire chord changes that offer an elusive, constantly shifting landscape for the soloists to navigate. The wistful "Evening Shades of Blue," meanwhile, paints a lush portrait of twilight in Hartford, wistfully evoked by Wilson's yearning soprano.

Finally, "Farewell, Brother" ends the date on a loving but tragic note, as a heartfelt tribute to an actual, rather than metaphoric, brother. Not long after a Christmas visit to Davis' native Binghamton, New York, where he introduced his new fiancée to his parents and younger brother Peter, Davis received a phone call that he calls "the worst of my life," informing him that Peter had passed away suddenly from an aortic aneurysm. "It's one of those things in life that you think could never happen to you, it happened in my family," Davis says. The tune focuses not on Peter's too-early death but on his infectious sense of humor and his giving spirit. Beyond its literal meaning, the title is a winking play on the fact that as a social worker, Peter's clients would often refer to him only as "The Welfare" - Davis flips the "welfare" around into "farewell," a final joke that Peter would no doubt have appreciated.