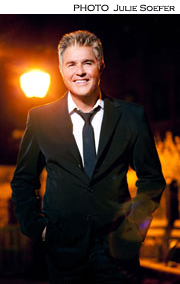 Steve Tyrell conducted this interview from his room at the Carlyle Hotel in New York City, where he was staying during his nearly two week spring residency at the Café Carlyle. The charismatic Grammy Award winning singer, hugely popular as a Great American Songbook interpreter since his 1999 debut A New Standard, recently extended his contract with the famed venue—where he succeeded the late Bobby Short--to continue his seasonal residency through 2014.
Such a residency, touring and club commitments and contracts with labels like Atlantic (his first) and his current home, Concord Records, would have seemed unfathomable for Tyrell two decades ago, when the veteran, songwriter and producer contributed the first standard he ever recorded, “The Way You Look Tonight” to the soundtrack to “Father of The Bride,” starring Steve Martin. Prior to that, he was strictly a behind the scenes force, launching his career in various capacities with Burt Bacharach and Hal David (and producing BJ Thomas’ hits “Hooked On A Feeling” and “Raindrops Keep Fallin’ On My Head”) before going on to produce legendary artists (including Rod Stewart, Linda Ronstadt, Ray Charles and Aaron Neville) and work in TV and film for many years. In 1992, he co-wrote the #1 pop hit “How Do You Talk To An Angel.”
The first in a wave of contemporary artists dedicated to recording standards since the early 2000s, Tyrell has become a fixture in the Top Ten of Billboard’s Jazz Albums chart with his titles Standard Time, This Guy’s In Love, Songs of Sinatra, Disney Standards, Back To Bacharach and I’ll Take Romance. In May 2011, the Texas born singer recorded a live performance DVD at The Grand 1894 Opera House in Galveston, Texas. His new album is It’s Magic: The Songs of Sammy Cahn.

JazzMonthly: It’s now been over 20 years since you sang “The Way You Look Tonight” on the first “Father of the Bride” soundtrack – which ultimately led to this great career singing standards. What’s been the most fulfilling part of this shift for you? The most surprising?

ST: The most fulfilling thing is the opportunity to have created this personal relationship with the Great American Songbook and see how other people have been affected by it. I really loved my career as a producer, working with Linda Ronstadt, Aaron Neville, James Ingram, Diana Ross, even Ray Charles and making those kinds of pop records. I always thought of the Songbook tunes are my parents’ music, though. I always loved it but it was in the back of my mind until I sang “The Way You Look Tonight.” I fell in love with the music and lyrics and people started telling me I should make an album of this kind of stuff. But my first thought was that it wouldn’t be relevant. Then a few years later, I sang “The Simple Life” and “On The Sunny Side of the Street” and the great Ahmet Ertegun and (Atlantic Records President) Val Azzoligot excited about the possibility of me recording for them and one thing led to another.

The most fulfilling thing has been meeting so many people and getting to have so many unexpected experiences. Rod Stewart became a fan and I worked with him on one of his Songbook albums and now we’re great friends. The Sinatras asked me to sing “Fly Me To The Moon” when Frank was inducted into the Hollywood Bowl Hall of Fame and President Clinton has come to see me. This past week I sang at Yogi Berra’s 88th birthday party. Just incredible!

JM: How did the opportunity to record the first song for Father of the Bride come about? After a lengthy career working with other artists in the limelight, were you surprised to realize how many people thought you could be an artist yourself?

ST: I was hired to work on a TV show based on the film “Baby Boom” by producer/directors Nancy Myers and Charles Shyer. When they started to work on “Father of the Bride,” they asked me to come up with a version of “The Way You Look Tonight” for the film’s reception scene, when Steve Martin saw his daughter dancing with her husband for the first time. Frank did the definitive version, but they wanted a soulful rendition. I did it and didn’t think much about it – but then Disney started to get hundreds of letters from people who loved it and wanted to know who was singing it, and did this singer have any other recordings. Of course there weren’t any! I started thinking maybe something could come of it but again, looking at the big picture, would an album of standards be worthwhile for me? I didn’t think about it seriously until we got an even bigger response to my songs in the film’s sequel.

JM: You did two more songs on the soundtrack to “Father of the Bride Part II” in 1995 but didn’t put out your first album, The New Standard, till 1999. What was involved in making the transition to recording artist and why did it take this many years?

ST: After the second movie, Atlantic showed interest but I also heard from big publishers who wanted me to make a standards album to generate business for their American Song Book catalog. One even offered to fund it! But I wasn’t interested in doing songs people told me to do, I wanted to do songs that I chose. I already had the three, and I started experimenting a bit in my home studio, recording classic songs that featured the original soloist on them. I reached out and worked with jazz greats Joe Sample, Harry “Sweets” Edison, Toots Thielemans, Plas Johnson and others. I was chipping away at it so by the time I heard from Atlantic, I had some produced tracks ready to go. That’s a funny story in itself. Val went to see “Father of the Bride Part II” with his wife and called me to say that she kept asking him who it was singing. She made him stay through the credits and go buy the soundtrack before they went home. He said if you want to do an album, Atlantic will make a deal. 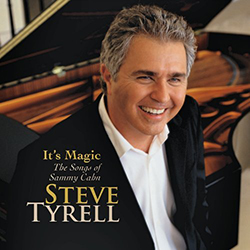 JM: Some of your albums have a mix of standards and others follow very specific themes like Sinatra, Disney, Burt Bacharach and your new album It’s Magic: The Songs of Sammy Cahn. How do you decide what you’re going to do each time out?

ST: Sometimes the albums evolve on their own. In the case of Songs of Sinatra, I did that one after his family asked me to sing at the Hollywood Bowl event. Connecting with them got me thinking that it would be a good idea to pay tribute. The key is to try to bring something new and original to the songs. What makes the Great American Songbook so amazing is that these songs allowed each artist to remold them into his or her own image and style. You can enjoy “Witchcraft” by me, Michael Buble, Frank and Tony Bennett, because we all came up with good ways to approach it. As for my other projects, the Bacharach is about me getting back in touch with my musical history, because I worked on some of those songs and did promotion for them. And the Disney classics album was a later outgrowth of my success with “Father of the Bride.” They came to me and suggested an album doing the best Disney songs in my style.

JM: Once you pick a theme, what is the process of choosing and arranging the material? What are the criteria?

ST: The criteria is being able to find an arrangement that’s right for the song and yet doesn’t copy the versions the public has heard for years. I am blessed to work with some of the most legendary arrangers in the business, including Alan Broadbent, Bob Mann, Don Sebesky, Bob Mann and John Oddo. I’ve heard “Come Fly With Me” by 50 other artists and most of them fall into the Frank arrangement. Don came up with a completely new take that fit the feeling of what the song is supposed to convey, and it’s a great way to lead off the set. You want to be unique but there is a fine line because you don’t want to be so clever that it gets you too far out of the song itself. One good example on the new album is “Teach Me Tonight,” which, Nancy Sinatra and Sammy’s widow Tita Cahn pointed out, were mostly sung by women. So I thought, why can’t I do that? I’m not too old to learn if there’s a good looking woman teaching me!

JM: Why Sammy Cahn this time?

ST: Simple: I’ve always loved his songwriting. As anyone who knows me is aware, I am a fan of songwriting and consider myself a “song man.” That comes from working with greats like Burt and Hal, Barry Mann and Cynthia Weil and being around Carole King, Gerry Goffin and Ashford and Simpson – and being a songwriter myself, though not in their league. Everything I do is from the “song out.” I got a lot of insight into Sammy’s way with words and poetic genius via my love of Frank, since Sammy wrote 87 songs Sinatra recorded. Sammy Cahn wrote a ton of songs for movies and I have a long history of working with movie songs, starting with “Alfie,” “Valley of the Dolls,” “Promises, Promises” and “Butch Cassidy.” Great film songs have always inspired me. It’s also Sammy’s 100th birthday this year!

JM: What do Sammy Cahn’s songs mean to you personally?

ST: I learned so much about songwriting from studying his work. He was one of the most brilliant lyricists who ever lived. He really wrote for the joy of it, though he had a funny response when people would ask him what comes first, the music or lyrics. He laughed and said, “The check” because he and Jimmy Van Heusen and Jule Styne were hired to do so many film songs. He was nominated for 23 Academy Awards. He wrote words that sing, and knew how to do that better than anyone. Taking a larger historical view, his words were really the voice of the Rat Pack and that era of music we look back on now as being the hippest time in music history.

Diddy used “Luck Be A Lady” when he did that commercial for Ciroc Vodka a few years ago. One of the top shows now is “Mad Men,” and people love the way the show captures that time. The Oscars celebrated 50 years of Bond music earlier this year. One of the lines that sets some of Cahn’s later work apart from early Songbook tunes is “picked out a queen size bed” in “Ain’t That A Kick In The Head,” which Dean Martin sang in “Ocean’s 11.” Cole Porter never wrote about beds in his time. So Sammy spoke for the hippest, sexiest people in history. Things started to get sexy.

JM: Why do you think we are still collectively so in love with the Great American Songbook?

ST: To me, these songs comprise America’s greatest contribution to the arts. Nothing we’ve ever done in music measures up to the songs written by Gershwin, Cole Porter, Jerome Kern, Dorothy Fields, Rodgers and Hart, Rodgers and Hammerstein and Sammy Cahn with Jule Styne and Jimmy Van Heusen. These greats knew harmonies and melodies and how to write words that sing. That’s what Sammy was most proud of, that he wrote words that sing. When he wrote “Call Me Irresponsible,” he said it was a “five syllable song” by a guy from a “one syllable neighborhood.” When I choose the songs I want to record, I feel like a painter working from an endlessly rich and timeless palette. My challenge is always to make the songs sound modern yet timeless.