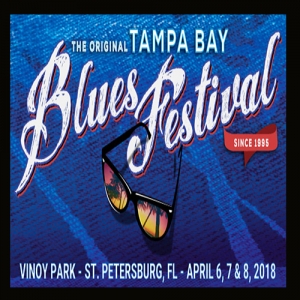 The Tampa Bay Blues Festival is one of the world’s finest blues music events, staged in the tropical setting of Vinoy Park on the shores of Tampa Bay. Please join us on April 6, 7, & 8, 2018, for three great days of blues by the bay! BUY your Tickets and VIP passes NOW!

Each year since 1995, some of the biggest names in blues music have taken the stage at the Tampa Bay Blues Festival in St. Petersburg, Florida. Blues enthusiasts from all over the world come to scenic Vinoy Park to watch this spectacular showcase of American Blues music, performed right on the waterfront. With acres of plush grass and palm trees, Vinoy Park is the perfect tropical setting for one of the world’s biggest and best blues concerts.

Tampa Bay Blues Festival has established itself as one of the world's preeminent blues concerts and was the recipient of the Blues Foundation’s 2011 “Keepin’ the Blues Alive” award for Best U.S. Blues Festival. Over the years our stage has welcomed legends such as Stephen Stills, Buddy Guy, George Thorogood, Taj Mahal, Robert Cray, Delbert McClinton, Little Feat, Jonny Lang, Los Lobos, Jerry Lee Lewis, Koko Taylor, Jimmie Vaughan, Irma Thomas, Susan Tedeschi, and others, in what has truly become a magnificent celebration of music!

The Tampa Bay Blues Festival is staged at Vinoy Waterfront Park in downtown St. Petersburg, Florida. Gates open at approximately 11:30 a.m. On Friday & Saturday, gates open at around noon. On Sunday, the gates will open at about 12:30 p.m.