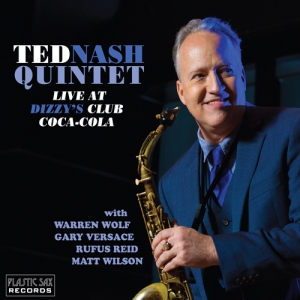 Releases his first live recording in over 25 years

Two-time Grammy–winning composer and saxophonist Ted Nash releases his first live recording in over 25 years. Known for his highly-acclaimed works (Presidential Suite, Chakra, Portrait in Seven Shades) this much anticipated release provides an opportunity for Nash to share his improvisational side. His inspired solos are impassioned and interactive. On this album he finds new areas of expression that will excite and move you.

These three nights at Dizzy’s were electric for me. I think you’ll hear in it the combination of great players, with history letting loose on music that has grown with me over the course of my career. On this album we share not just a night of music but the history of collaboration.

It was a wonderful opportunity to make music again with many of my favorite musicians. I have known Rufus Reid since I was 24, when we recorded an album featuring my mother and father (which never was released). Rufus always plays with tremendous instinct and flexibility and brings decades of experience to the music. Rufus appeared on my Mancini Project album (Palmetto).

I first met Matt Wilson when I was 18 and he 14, when I came to Rock Island, Illinois to play with Louie Bellson’s quartet. Of course I had no idea the skinny teenager I met that night would become one of jazz’s greatest contributors, appearing on more than 250 recordings. Matt has played on several of my albums, including Sidewalk Meeting, Still Evolved, La Espada de la Noche, In the Loop, and The Mancini Project.

This is the second time Warren Wolf and I have played in a quintet at Dizzy’s together. He is one of the most consistently killing vibraphonists I have heard; at once fiery and cool. He is also one of the most melodic players – on any instrument. I have always had a connection with the vibes, as my jazz teacher was the great vibraphonist Charlie Shoemake, with whom I also played my first small band gigs, at the long-gone Donte’s in Los Angeles.

I have known Gary Versace for years, hearing him with many great ensembles, and have always wanted the chance to play in a small group with him. I got that chance, and the experience is something I will never forget. The moments he found on Emily, for example (which we played as a clarinet and piano duo) were rich, inspiring and truly original. I feel Gary is on the cusp of being acknowledged as one of piano’s superstars.

This performance was also a chance to revisit a couple original compositions in an entirely new context, and re-explore music by some of my favorite composers: Chick Corea, Thelonious Monk, Herbie Nichols, Johnny Mandel, and Henry Mancini.