THE B CHRISTOPHER BAND – Four from the Sun 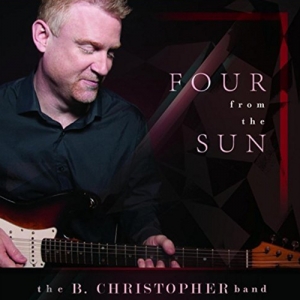 THE B CHRISTOPHER BAND

Four From The Sun

"FOUR FROM THE SUN" is the latest release from guitarist B. Christopher. It is a twelve song set of originals showcasing the talents of top-tier studio musicians including Los Angeles bassists, Nathan East and Stu Hamm; New York's finest drummers, Anton Fig and Shawn Pelton as well as sax extraordinaire, Andy Snitzer.

B. Christopher makes his musical mark primarily on television. He has written hundreds of tracks that have been used over 15,000 times on just about every channel on television. It's this success that has led him to share the studio with the remarkable talents from both coasts.

His 2015 debut, "High Tide", was also no stranger to the "A List". Nathan East, Anton Fig, Kenny Aronoff and Gerald Albright all lent their skills to the project. It peaked at #13 on the smoothjazz.com Indie Album Chart as well as #23 on the Top 50 chart.

What attracts not only the biggest studio musicians as well as television networks to B. Christopher's exceptional compositions and tasteful melodies? Give it a listen and you'll know.