THE BLACK MARKET TRUST – Just One of Those Things 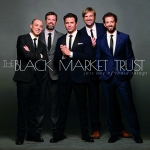 Optimistic take on classics from the Great American Songbook and beyond

Los Angeles, CA - March 15, 2017 -- The Black Market Trust’s musical roots run deep, and their new album "Just One of Those Things" reflects that. Artists as diverse as Django Reinhardt, Cole Porter, Frank Sinatra, John Lennon and Paul McCartney, Brian Wilson, are among the talents that influenced the creation of the album. As true artists, the members of the group channelled their inspiration into a sound all their own.

The five members of The Black Market Trust, Jeffrey Scott Radaich, Chris Irwin, Brian Netzley, Brandon Laws and Nick Coventry imbue the album with an obvious love of music and contagious, upbeat, toe tapping joy. The title track, the much performed Cole Porter classic "Just One of Those Things", feels fresh and optimistic as performed by the group. "God Only Knows" by the Beach Boys is especially poignant sung in Radaich’s tender baritone. "Please Stay", a Black Market Trust original in the style of Jamaican Rocksteady, showcases the group’s lyric writing ability and wide range.

If you can’t catch a live performance of songs from "Just One of Those Things", the album is available on iTunes, Spotify and CD Baby.

The Black Market Trust is a five member jazz band based in Los Angeles. Since the 2012 release of their all instrumental debut album "The Black Market Trust," a milestone in the genre of gypsy jazz, the band has gone on to record two more albums, maintain a busy touring schedule, and have their music featured on TV shows like the ABC television series "Happy Endings" and the Hulu original program "Casual." The band features the Django Reinhardt inspired gypsy sound of acoustic instruments, and infuses classics from the Great American Songbook with intricate vocal harmonies inspired by The Beach Boys, and other artists influential to the group. Their sophomore album "II" featured a Top Ten hit on the Adult Contemporary charts, a signature version of "Route 66".