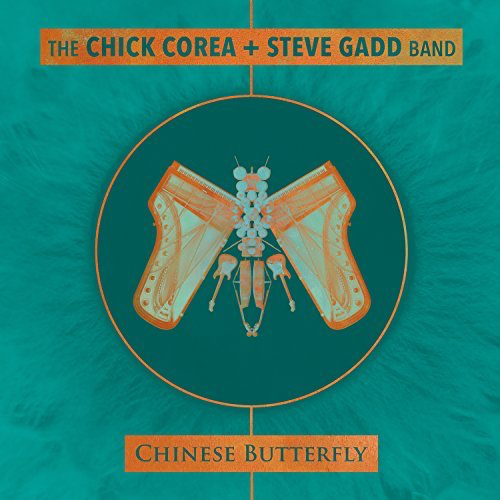 Chick Corea and Steve Gadd are old friends, having worked together on several notable occasions back in the 1970s. Gadd was the original drummer with the second version of Return To Forever before he was succeeded by Lenny White. He appeared on several of Corea's albums during 1975-81 including The Leprechaun, Friends, Three Quartets and, most notably, My Spanish Heart.

Both of the musicians have had very busy and prolific careers. Corea is listed in Tom Lord's Jazz Discography as having been on 435 sessions while Gadd was on 525 (and an infinite number of others that were not jazz-oriented). Those impressive numbers are still growing on a nearly-daily basis, particularly for Corea who always seems to have five different projects going on at once.

Chinese Butterfly is a two-CD set that documents the new band that they co-lead. In addition to Gadd and Corea on keyboards, the group includes Steve Wilson on soprano, flute and alto, guitarist Lionel Loueke, bassist Carlitos Del Puerto and percussionist Luisito Quintero. The quintet performs seven of Corea's originals (including "Wake Up Call" which was co-written with Loueke) and John McLaughlin's "Chick's Chums."

The sound of the band is often very much like some of Corea's freelance projects of the mid-to-late 1970s after the breakup of Return To Forever when he was featuring a quieter sound and a more melodic style. Throughout the project Gadd is in a supportive role, clearly enjoying interacting with the other musicians in a mixture of Latin, funk, light fusion and lyrical music, much of it unclassifiable Always distinctive on electric piano and synthesizer, even in the early period when nearly all keyboardists had a similar tone, Corea is in particularly exuberant form on the opening "Chick's Chums." The joyful piece is an excellent introduction to the band with its fine interplay by the leaders and a good solo for Wilson on soprano.

Loueke sings quietly on "Serenity" and "Wake Up Call" and also takes concise guitar solos throughout the set, often sounding a bit like a keyboard. "Like I Was Saying" features the Corea-Del Puerto-Gadd trio while "A Spanish Song" has Wilson's soprano and Corea's acoustic piano taking honors. Loueke and Wilson interact with Corea during the main part of "Chinese Butterfly."

The second CD is comprised of three lengthy performances, each of which are essentially mini suites. Best is a remake of "Return To Forever" which is given an atmospheric beginning and includes an effective wordless vocal from guest Philip Bailey.

Because of the huge discographies of Chick Corea and Steve Gadd, Chinese Butterfly (which is available from www.concordmusicgroup.com) would not be considered his definitive album, but it is certainly a worthy effort that their many fans will want.