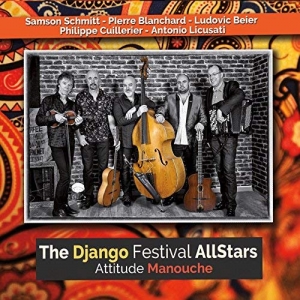 The Django Festival All Stars

The comeback of Django Reinhardt's music and style is unprecedented in jazz history. The great gypsy guitarist, had no real competitors when he burst upon the European jazz scene in 1933, topping the earlier accomplishments of Eddie Lang and Carl Kress. No guitarist had ever soloed with his power, fire and creativity. Other than Oscar Aleman, very few guitarists could closely emulate his style during that era. When Charlie Christian emerged in 1939 on electric guitar, he became the main influence on jazz guitarists for the next few decades. In the 1940s, Les Paul was one of the few who showed Django's influence. At the time of Reinhardt's death in 1953, no one was around to take his place.

A funny thing happened 20 years later. Django Reinhardt's unique style on the acoustic guitar was not only rediscovered but was copied and built upon by scores of masterful guitarists, particularly in Europe. Called "Gypsy Swing," the movement has steadily grown during the past 40 years and there are many festivals featuring groups sounding close to Reinhardt's with virtuosic guitarists who are trying to develop their own musical personality out of his conception.

Birdland in New York has hosted the Django Reinhardt NY Festival since 2000. The all-stars featured on this CD, who came together at the festival, are guitarist Samson Schmitt (following in the footsteps of his father the great guitarist Dorado Schmitt), violinist Pierre Blanchard, the brilliant accordionist Ludovic Beier, rhythm guitarist Philippe "Doudou" Cuillerier (who sings the closing "Viens Chez Django") and bassist Antonio Licusati.

While the performances on Attitude Manouche are often very much in the style of the Django Reinhardt/Stephane Grappelli Quintet of the Hot Club of France (with accordion in place of the second rhythm guitar), none of the music was in Django's repertoire. With the exception of the theme from Schindler's List, all of the songs are originals by band members.

Whether it is the speedy "Late Train," the joyful swinger "Laugh With Charlie," the beautiful ballad "Nocturne" or the Eastern European romp "Tasigane Fantasy," one could imagine Django Reinhardt enjoying playing these songs, and being challenged by these musicians. Schmitt would give him a run for his money, Blanchard would remind him at times of Grappelli, and Beier's accordion would form a solid backdrop behind him.

Any listener who loves Gypsy Swing will certainly enjoy the fresh material and lively playing by the Django Festival All Stars on Attitude Manouche.