THE EBONY HILLBILLIES – 5 Miles From Town 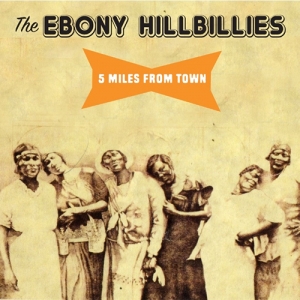 Launched on the streets of NYC, The Ensemble Has Performed at Carnegie Hall and Lincoln Center And Appeared on the BBC, ABC's "Good Morning America" and Other Networks.

THE EBONY HILLBILLIES
From the street corners of Manhattan to the hallowed stages of Carnegie Hall and Lincoln Center to TV appearances on the BBC and ABC's "Good Morning America," The Ebony Hillbillies are a true phenomenon, reviving the lost art form and American legacy of string band music for a whole new generation.
Continuing to bring a fresh urgency to the genre for a 21st Century world in need of some deep musical education, the dynamic ensemble – led by Henrique Prince (fiddle, vocals) with Norris Bennett (banjo, mountain dulcimer, guitar, vocals), Gloria Thomas Gassaway (on vocals and bones), acoustic bassist William "Salty Bill" Salter (3x-Grammy winning co-writer of legendary pop hits like "Where is the Love" and "Just The Two of Us"), Allanah Salter (shaker, vocals), Newman Taylor Baker (washboard percussion) and A.R. on "cowboy" percussion kit - are releasing their latest full length album,

5 Miles From Town.
Infused with the Hillbillies' trademark mix of pop, country, bluegrass, folk and jazz, the full length collection reflects a soulful, gritty and alternately funky, romantic and socially conscious place where toes are always tapping, percussion is slapping, fiddles are jamming, front porch chairs are rocking, banjos are plucking and voices are raised in determination and triumph.
Mixing lively instrumentals and vocals over the course of 11 tracks and 3 alternately playful and hard-hitting snippets/skits, the group performs everything from a down home fiddle jam ("Hog"), the gentle romantic cautionary tale "Fork in the Road" and an intimate cover of Bonnie Raitt's "I Can't Make You Love Me" to the incisive social commentaries "Another Man Done Gone (Hands Up Don't Shoot)" (about black men and police shootings) and "I'm on My Way To Brooklyn," which rolls as a lighthearted NYC inspired spiritual until the end...and three gunshots.
The Ebony Hillbillies started out on the streets of Manhattan, but their vibe and influence has extended over the years to acclaimed live performances at legendary venues like Carnegie Hall and Lincoln Center; appearances on the BBC, Good Morning America, NBC, CBS, etc., international music workshops and festivals, visual artist collaborations at museums (including The Whitney with phenom Kara Walker and The Smithsonian Museum), Guest school programs, Foot stomping and Hand-clapping Dance parties and more. In the digital era, they have sold thousands of hard copies of their four CDs – Sabrina's Holiday, I Thought You Knew, Barefoot and Flying and 2015's Slappin' A Rabbit – Live! – at their shows and via their globally popular website, www.theEbonyHillbillies.com

EH CONTACT INFO.
Please contact us directly at www.theEbonyHillbillies.com
For more press info - please get in touch with Tom Estey at tje6464@aol.com or ab walker at ehmusicmgmt@gmail.com