THE MATTSON 2 – Play A Love Supreme 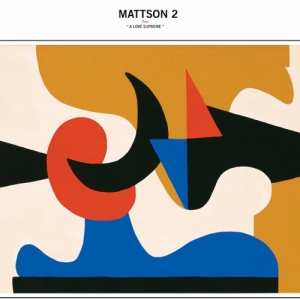 FULL ALBUM COVER OF JOHN COLTRANE CLASSIC
The Mattson 2, the virtuosic guitar-and-drums jazz duo of twin brothers Jonathan and Jared Mattson, announced Mattson 2 Play A Love Supreme, their full album cover of John Coltrane's 1964 masterpiece. The record is due on August 17 on Spiritual Pajamas and finds the brothers translating the iconic saxophonist's spiritual vision into a thrilling 21st-century electric exploration. "For us it's about taking this beautiful art form and adapting it," says Jonathan, "being forward thinking and not trying to confine it to this narrow definition that has been set out by purists over the years." Along with the announcement, the Mattsons shared their version of "Resolution."
Mattson 2 Play A Love Supreme is available for pre-order now.
The Mattson 2 recently wrapped a North American tour in support of psych-jazz breakouts Khruangbin. Prior to that, the duo released Chaz Bundick Meets the Mattson 2: Star Stuff, a collaborative album with the Toro y Moi frontman that Pitchfork said "swings between lucidity and lunacy and back again." Premier Guitar has praised the Mattson 2's "potpourri of sonic colors and trance-inducing grooves," while Aquarium Drunkard has called the twins' musicianship "telepathic chemistry - effortlessly and mesmerizingly in-sync."
John Coltrane's 1965 magnum opus A Love Supreme is one of the most revered and influential recordings in the history of jazz, widely regarded as the iconic saxophonist's masterpiece. It might seem audacious at the very least to undertake a new recording of such a foundational album, but twin brothers Jared & Jonathan Mattson are nothing if not sonic risk-takers.
With their new release Mattson 2 Play A Love Supreme, the duo reimagines Coltrane's avant-garde epic through a 21st-century lens, creating a new interpretation that remains faithful to the questing spirit of the original while pushing the music into bold new territory - which itself is fully in keeping with the composer's forward-looking vision. The album, due out August 17 via Spiritual Pajamas, translates the Coltrane Quartet's acoustic jazz explorations into a modern language swathed in a haze of analog synths, ecstatic guitars, transcendent grooves and enveloping atmospherics.

"Our goal was to showcase our own reinterpretation of the piece, to really push forward and try to evolve the art form of jazz," says Jonathan Mattson. "For us it's about taking this beautiful art form and adapting it, being forward thinking and not trying to confine it to this narrow definition that has been set out by purists over the years."