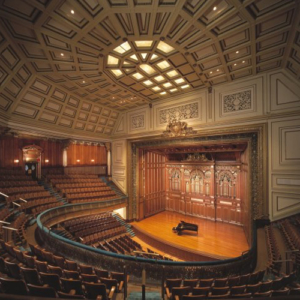 The NEC Jazz Orchestra opens its season with Tonight: The Music of Leonard Bernstein on Thursday, October 18 at Jordan Hall

Program of Bernstein classics is part of NEC's fall celebration of the great composer, conductor, and educator's centennial including an exhibition of more than 150 Bernstein artifacts

As part of NEC's celebration of the 100th anniversary of Leonard Bernstein's birth, the NEC Jazz Orchestra kicks off their season with a program of Bernstein classics on Thursday, October 18 at NEC's Jordan Hall, 290 Huntington Avenue, Boston. Ken Schaphorst conducts the 7:30 p.m. performance. Free, tickets required. For information call 617-585-1122 or visit https://necmusic.edu/events/nec-jazz-orchestra-presents-tonight-music-leonard-bernstein.

The program includes selections from Bernstein's beloved Broadway masterpiece West Side Story, a piece he wrote for Billie Holiday entitled "Big Stuff," and "Almighty Father" from his Mass. The program will also feature his "Prelude, Fugue, and Riffs," which Bernstein described as "a serious piece of American music," premiered on the "Omnibus" television show entitled "The World of Jazz." The concert will include more music from that 1955 TV show, including Bernstein's blues arrangements as well as two contrasting perspectives on the jazz standard "Sweet Sue, Just You."

The concert is one of numerous NEC events to celebrate Bernstein's centennial. A Boston native, Bernstein was an alumnus of NEC Prep and one of America's greatest 20th-century composers, conductors, and educators. The celebration includes the exhibit Leonard Bernstein at 100 on display at the Student Life and Performance Center through November 11. The exhibit features more than 150 artifacts including photographs, personal items, scores, correspondence, and films. Visitors will learn about Bernstein's early years from Boston Latin to Harvard, and enjoy interactive displays on West Side Story and conducting. Other Bernstein 100 events feature the NEC Philharmonia on October 3, NEC Symphony on October 17 and November 7, NEC Opera on October 23 and 24, NEC Youth Philharmonic on November 15, and NEC Youth Chorale on November 11.

NEC's Jazz Studies Department was the first fully accredited jazz studies program at a music conservatory. The brainchild of Gunther Schuller, who moved quickly to incorporate jazz into the curriculum when he became president of the Conservatory in 1967, the Jazz Studies faculty has included six MacArthur "genius" grant recipients (three currently teaching) and four NEA Jazz Masters. The program has spawned numerous Grammy winning composers and performers and has an alumni list that reads like a who's who of jazz. As Mike West writes in JazzTimes: "NEC's jazz studies department is among the most acclaimed and successful in the world; so says the roster of visionary artists that have comprised both its faculty and alumni."