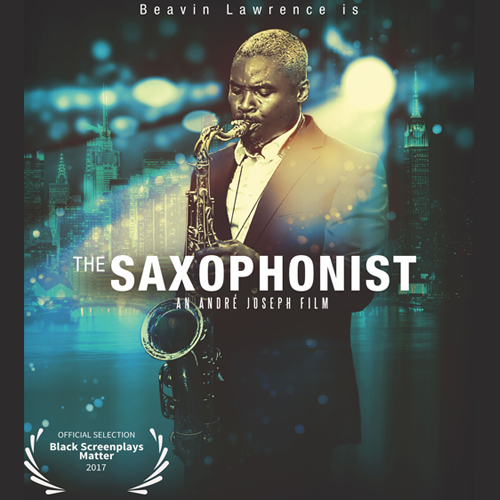 THE SAXOPHONIST
An Andre´Joseph Film 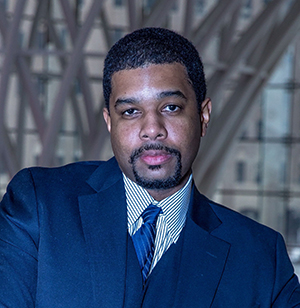 As the screenwriter, producer, and director, The Saxophonist is more to me than a short film project. Ever since I wrote the screenplay as a student at Emerson College twelve years ago, it has been my love letter to jazz music. The story revolves around a talented young saxophonist who is conflicted between moving to Los Angeles to take his career further or to stay in New York where he falls in love with a beautiful jazz-influenced ballet dancer. At the time, I was inspired by a history of jazz course that I was enrolled in and my professor was the sole basis for the title character. He is someone who respects music’s history and he wants to preserve it while aspiring to break new ground as legends like Charlie Parker, Miles Davis, and John Coltrane had done previously.

As I grew older, I occasionally returned to the screenplay for rewrites. The story became more relevant over time as I discovered for myself and fellow artist friends of mine how challenging it can be to balance career goals and romance. The Saxophonist is the perfect project for me as a screenwriter and film director to explore the themes of making difficult choices, love and sacrifice, and the struggle to hold on to your dream.

My ideal target audience for The Saxophonist will range from young adults in their twenties to late thirties who have an appreciation for live music as well as independent film. I believe that the recent Oscar-nominated films Whiplash and La La Land were examples of jazz-oriented dramas that successfully attracted both young and older demographics. As a love story, The Saxophonist is a timely tale because it is told from the point of view of a struggling artist who conflicts between opportunity and romance. For me as a struggling artist who has sacrificed so much of my social life to dedicate myself to the craft of storytelling through film, my vision is the most appropriate to bring this project to life. 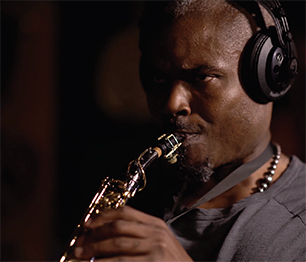 Lonnie Johnson is a talented but struggling saxophone player who is waiting for his big break to arrive. In the midst of losing his girlfriend and recording a demo record for a major label, he meets a ballet dancer named Adella who he has an instant connection with. When the label requires him to move to Los Angeles, Lonnie must choose between his music career and the girl who could be his soul mate.

Award winning writer/ director Andre´ Joseph presents his most personal film yet with the romantic drama, The Saxophonist. This is the latest short film effort from the New York-based production company, AJ Epyx Productions, and making his acting debut is Brooklyn-based saxophone player Beavin Lawrence.

Lonnie Johnson (Beavin Lawrence) is a highly talented saxophone player waiting for his big break to arrive. In the midst of losing his girlfriend (Ann Flanigan) and recording a demo record for a major label, he meets a ballet dancer named Adella (Nadya Encarnacion) who he has an instant connection with. But when the label decides to not only sign him but also require that he moves to Los Angeles, Lonnie must choose between his career and the girl who could be his soul mate.

The story for The Saxophonist originated in 2005 when Andre´ was a film student at Emerson College. At the time, he was inspired by a history of jazz course that he was enrolled in and his professor was the sole basis for the title character. “He is someone who respects music’s history and he wants to preserve it while aspiring to break new ground as legends like Charlie Parker, Miles Davis, and John Coltrane had done previously,” says Andre´. With each rewrite, Andre´ added more personal touches to the story by making it less of a standard ‘boy meets girl’ tale and more about the struggle of being an artist pursuing their dream in the big city. By 2016, Andre´ felt it was the perfect time to bring The Saxophonist to the screen. He applied for and was accepted to the fiscal sponsorship program with the New York Foundation for the Arts which allowed for all donations to the project to be tax deductible. The program played a part in connecting Andre´ to producer Bill Mack of Cinomadic who had a shared interest in film and jazz. Bill would play a major role in assembling the crew for the film including critically acclaimed cinematographer, Charlie Williams.

In casting The Saxophonist, it was always Andre´’s intention to hire someone with real saxophone talent rather than hiring an actor to mimic the performance. With the help of a family musician friend, Andre´ was connected to Beavin Lawrence nearly a year before the start of production. “I felt an instant vibe from him that remind me of what I wrote in the character of Lonnie,” says Andre´. “He’s somebody that’s cool, wants to respect the past while pushing the music forward.”

Andre´ and Beavin would work closely for 8 months in rehearsing the script as well as making musical selections for the film from Beavin’s 2008 album, Infinite Possibilities. For Beavin, acting was a new and exciting challenge after years of working as a traveling musician. “Just like I worked on the music, I’m going to take that same approach to acting,” says Beavin. “It will be a new frontier for me. That’s the most exciting thing. Doing something brand new.” 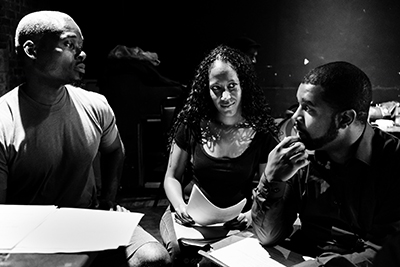 The supporting cast that Andre´ would assemble would help to bring the best out of Beavin as an actor. Stage actress and singer Nadya Encarnacion was cast as Adella, a French ballet dancer who becomes Lonnie’s main love interest. Nadya would spend several weeks practicing ballet choreography with Joan Adams, an actress friend of Andre´ who has taught dance in various schools around Staten Island, NY. Actor/dancer/singer Michael Anthony Roberts was cast as Art, the jazz bar historian who tries to give Lonnie the proper perspective about his life and career. Remaining supporting roles include stage actress Ann Flanigan as Lydia, Lonnie’s ex; actress/ comedian Ron’Netta as Jeane, Lonnie’s blind date gone bad; stage actor Jarett Smithwrick as Carlton, the jazz producer seeking to sign Lonnie to his label; and R&B singer/ songwriter Zoiea Ohizep as Sidney, Lonnie’s musician friend.

Production on The Saxophonist began in August 2017 with a six day shoot which took place in locations around Manhattan, Brooklyn, and Staten Island. The first two days were shot at The Producers Club on West 44th Street where the ballet and jazz bar scenes took place. These were the most challenging days on the production due to the great number of scenes that had to be shot while balancing the schedule around other productions taking place inside the space which often times presented sound issues on set. But when it mattered most, the crew gave their full effort to ensure the best shoot possible.

The most exciting moment during that time was filming the live performance scene with Beavin alongside incredibly talented musicians such as Mark Johnson, Eric Wheeler, and Warren Byrd.

Andre´ made a specific request to have the majority of the film’s music to be recorded live, a choice that had been made previously by world renowned French director Bertrand Tavernier with his award winning 1986 drama, Round Midnight. Like Tavernier, Andre´ wanted to capture the authentic sound of jazz music without it being artificially re-recorded later in post-production.

The third day of production took place at the family apartment of co-star Ronnie Caldwell who plays Parker, the studio engineer. This location was used for Lonnie’s home when he gets into a bad breakup with his first girlfriend, Lydia. The intense exchange between characters would bring out the best in Beavin and it showed his growth in such an amazing amount of time. The remaining scenes between Lonnie and Adella were shot around the Williamsburg section of Brooklyn while the recording studio scene would be shot at Moon Studios in Staten Island.

“As a love story, The Saxophonist is a timely tale because it is told from the point of view of a struggling artist who conflicts between the chance of a career breakthrough and being in love with a talented young woman with her own ambitious dreams,” Andre´ said. “For me as a struggling artist who has sacrificed so much of my social life to dedicate myself to the craft of storytelling through film, I believe that my vision is the most appropriate to bring this project to life.”