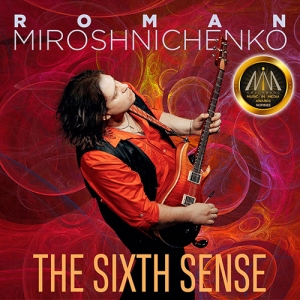 “It’s a very special album, recorded during a very untypical time! My inner voice told me to start a new recording and suddenly new ideas began to come one after another. So I decided to name the album "The Sixth Sense”! - Roman quoted - “And it was really amazing because I worked predominantly in my studio with an amazing artists, my musical brothers from USA, Canada, Great Britain, Brasil, France and Russia over FaceBook, Skype, tonns of E-mails. I am very glad that they all gladly agreed to take part in the recording and they did their best! So, we encouraged each other, making sure that we can continue to record good music for people despite the pandemic. This is my Best recording I think!”

Roman Miroshnichenko is a virtuoso guitarist, one of the premier guitarists of the new generation of the jazz-fusion music. He has received a total of 30 nominations with 10 wins in multiple international songwriting contests and music awards throughout 2010-2020, including four The Independent Music Awards, 1st Prize of the USA Songwriting Competition, 1st Prize of the International Acoustic Music Awards. Roman is featuring on The Great Jazz Guitarists encyclopedia by Hal Leonard Books, the most comprehensive and competent guide to jazz guitarists ever published (from Django Reinhardt to John McLaughlin and beyond).